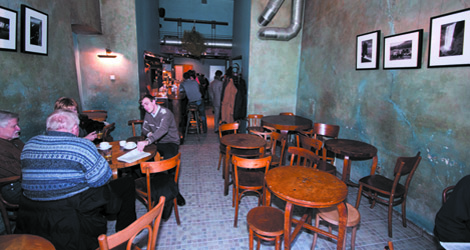 I’m pretty sure I would have demanded to see Christ’s wounds. Just because some dude pops up claiming to be the guy you saw unequivocally nailed to a cross and then entombed is no reason to abandon basic empirical enquiry.

It was in this spirit that I approached ul. Świętego Tomasza, the chosen field of combat for March’s Bar of the Month tussle. Conventional wisdom has it that Dym is the messiah of bars on this particular street and I was determined to stick my fingers into each of its five sacred wounds and have a good poke around.

I approached in the company of apostles already confirmed in the church of Dym. Tomasza is a long street and, from whichever end you start, there are plenty of preliminary watering holes at which Damascene conversions are possible. The faithful were having none of it.

At one end of the street is Imbir, a cellar dive where I once failed to gain free entry to a fancy dress party by turning up dressed as a drunken Englishman, while drunk. At the other is Pub Społem, an underground garden of youthful delights where I recently discovered that I am very old.

In between we sampled Diva, which appears to be a bar dedicated to highly polished surfaces and knowing who Alexander McQueen is – we didn’t fit in. We also washed up in Cafe Manekin – a very nice place except that everything is exactly nine tenths of the size it should be, which quickly made me nervous that I was going to crush something underfoot or otherwise end up in a Lilliputian court of enquiry.

Dym was, finally, inescapable. The route of the street even has a peculiar kink that seems designed to bounce you through its nondescript door. There are some walls, a floor, a ceiling, some gravity and a bar. By far the most notable feature is the massive air-extraction apparatus installed at great expense to remove the dym (smoke) for which the place was famous before the introduction of the smoking ban.

I argued these points with the disciples, but they retained the dewy eyes of the fanatic. The secret, I was told, lies in the place’s blankness. Dym is a neutral space in which you can be whoever you want to be, they incanted. I await my conversion with interest.

One thought on “Bar of the Month: Dym”