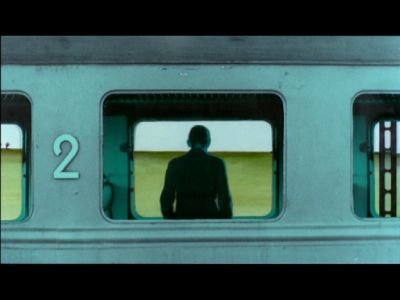 Polskie Audiovisualne Publishers have released a real bounty of riches entitled, “The Anthology of Polish Animated Films,” 222 minutes of Polish animation from 1958 to nearly the present day, including some of the brightest names in Polish animation history, stretched over two DVDs and including English and French subtitles (these are mainly superfluous – the majority of the films use only musical soundtracks). As with any collection of this sort there is some filler here, but the amount of superb material makes it well worth the forty zloty being asked in shops. To start with the absolute classics, we have Zbigniew Rybczynski’s “Tango,” whose action, if you could call it that, takes place in one room shot from one still perspective. People come in and out of the room from various entrances, performing sometimes mysterious actions. Everyone repeats their actions oblivious to one another, the people multiply and pass through each other, and only at the end does a moment of “interaction” occur. The film is visually magnificent and commits itself to no one easy “message,” while in no way strikes the viewer as meaningless. A great, great piece of work. If you have never seen Julian Antonisz’s work (a native of Krakow), his “Sharp, Engaged Film” made with his “non-camera” technique will be worth your forty zloty alone. Spastic, illogical, mildly deranged. With a rollicking home-made soundtrack. A different kind of brilliance comes right at the beginning of the history traced here, with the very famous Jan Lenica (also known for his involvement in the Polish Poster School) and Walerian Borowczyk (also known for the kinky films he went on to direct in France). Each has one solo film here, the Lenica one more surreal, the Borowczyk one more affecting, but their co-production – a real oddity called “The House,” is probably where their talents bloom most fully. It looks like a film Luis Bunuel might have gone on to make after “Un Chien Andalou,” if he had allowed himself to make a little less sense. “Parables of existence” is a risky category in animation, and one that more often than not falls flat on its face, but Stefan Schabenback’s “Stairs” and Jerzy Kucia’s “Reflections” both demonstrate enough visual sensitivity and intelligence for these 7-minute-long metaphors to work, and even have a compelling strength. Kucia’s later film presented here, “Tuning the Instruments,” will be too dissonant or conceptual for many a viewer, but it is the work of a mature animator struggling to stretch the medium to its furthest extremes. Final stand-outs from this collection are Zofia Oraczewska’s “Banquet,” a Jan Svankmejer-esque horror film, telling the tale of role reversal between food and diner. “The Changing of the Guard,” made in the 1950s, is a fairy-tale of matchboxes that has an undeniable visual appeal. Having said that, most viewers will groan and reach for their fast-forward button during Witold Giersz’s tedious painted animation, or during Danial Szczechura’s ineffective satire (“The Armchair”) or exercise in monotony (“The Journey”). Miroslaw Kijowicz’s philosophical reflections (“Cages,” “The Road”) are unlikely to provoke gasps of delight or bursts of inspiration in viewers, and Piotr Dumala’s travesty of a fairy tale (“Little Black Riding Hood”) is the sort of thing that English-speaking audiences have by now seen done a hundred times, and better. So a mixed bag, surely, but even the flops can offer a fascinating glimpse into a unique period of Polish animation, where budgets were not always high, but where genius often flourished because of the limitations that existed on the creators.