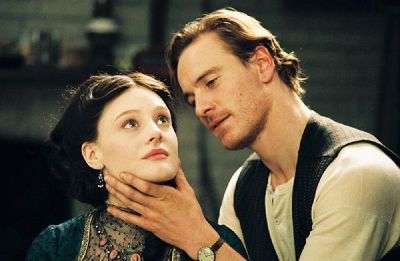 When French second-string film director Francois Ozon released his soft-porn, soft-intelligent “thriller” entitled “Swimming Pool” a few years ago, viewers might have left the cinema asking “Is he joking?” After watching his latest film entitled “Angel,” an English-language quasi-melodrama with quasi-artistic pretensions, they might be more likely to ask “Is he serious?”. Both films deal with writers and gently ask questions about “who is telling the story,” but whereas Ozon didn’t seem to quite feel at home with the narrative games he attempted in “Swimming Pool,” he appears distressingly comfortable in the kitschy atmosphere of the costume drama he creates here. Though “Angel” is meant to take place in the early 20th Century, its heart is lodged firmly in 19th Century melodrama. All the scenes are too sumptuous, the emotions too passionate, the metaphors too idiotic (the lead heroine – Angel – goes to live in Paradise Manor… But is it Paradise after all? And so on…) and the visual language comes straight out of 19th-Century melodrama. When the male love-interest is consumed by dark thoughts, he grows a beard to show he is experiencing hard times. This kind of trite “signal” to the audience was one of the major hallmarks of 19th-Century popular theater. Very briefly, the story is about a young writer (Angel) whose writing talent brings her from a squalid existence in a small British town to fame in London. She writes trashy romantic novels, is applauded by the masses, meets a Bohemian painter, marries him. He goes off to war, she falls into depression, and well, things end badly.There are, granted, some interesting questions raised along the way. When the leads declare their love for one another and kiss for the first time, the camera pans back dramatically to reveal a rainbow sweeping over their heads. The scene is, on the one hand, inexcusable, one of the most breathtakingly awful love scenes of the year. Yet it is also one of a few indications that the film itself comes from the melodramatic pen of the lead character herself. There is also an suggestion at the end that the story of the film has been written by Angel’s most trusty servant, also a lover of melodrama. Ultimately, however, it would seem that Ozon himself has his heart firmly planted in 19th-Century romanticism, and the rainbow is there not to indicate a narrative complexity but because Ozon likes it. After all, could a director with no liking for this romantic nonsense stomach the process of making a two-hour film about it? Hardly. I believe that a director like Ozon is making baby-steps away from the ironic post-modernism that was epidemic at the end of the 20th Century. Just ten years ago a rainbow like that in a costume drama would have been emphatically sarcastic. With Ozon it is hard to tell, but one suspects that it is a sincere rainbow, that the director’s heart is in it. The conversations Angel, the populist writer, has with Esme, the “serious” painter of dark pre-cubist landscapes whom she loves, attempt to introduce some intelligent subject matter into the film. The painter represents serious art being “seduced” by popular culture, presumably. The problem is, no matter how one formulates the messages of this film, one ends up with cliches. True art blooms in poverty. The masses will never understand real artists. Real art means suffering and death in obscurity. Beauty isn’t always found in bright colors. These are all ideas that most of us probably thought profound in high school, but one expects something a bit more thought-provoking from an allegedly-important European director. The trouble is, Ozon isn’t really interested in devoting much time to thinking about what art is all about. He’d just like to make a pretty story. “Angel” is now playing at Pod Baranami Cinema on Rynek Glowny.