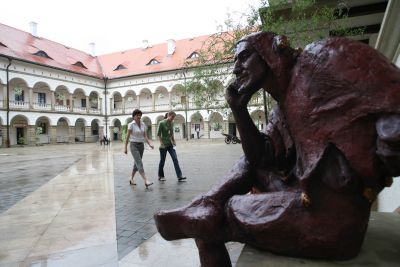 Malopolska Province has passed an important test in its quest to win 1.29 bln euro in economic-development money from the EU.The European Commission has signed off on the province’s development plan, known as the Integrated Regional Operational Program.The EU’s European Regional Development Fund is helping to finance development in Malopolska and every other province in Poland.The European Commission’s approval of Malopolska’s development plan means the province and the local governments within it will get 1.29 bln euro for development between 2007 and 2013. That is an average of 215 mln euro a year.The EU gave the region 185 mln euro between 2004 and 2006, or about 92.5 mln a year.So the new figure is 2.5 times more than the EU has ever committed to the region. Malopolska is the third of Poland’s 16 provinces to win EU approval for its development plan. “For us, this is a historical moment,” said Marek Nawara, the governor of Malopolskie Province. The region will get 7.7 percent of the 16.5 bln euro that Poland will receive The infusion of EU money may rev up the economy in a way that the Malopolska Region has never seen before.The Integrated Regional Operational Program set nine economic-development priorities. The biggest amount – almost 400 mln euro, or 30 percent of the total – will be for roads and public transport. The road work will involve both new construction and the redoing of existing routes but also enhancing economic activity of this sector. Another big chunk of the EU money – more than 160 mln euro – will go toward improving the educational system, especially helping to develop an information society.Schools will be able to apply for grants to refurbish their facilities, add resources such as libraries and add or replace equipment.Schools and other public institutions will be part of a project known as eCitizen. Its objective will be to develop a public-sector information-technology infrastructure that allows more public-sector access to the Internet and helps develop IT services. Another priority is tourism, one of the fastest-growing areas of the economy in recent years. About 100 mln euro of EU money will go toward developing tourism businesses and services, and promoting tourism.For the first time the region will spend a sizable chunk of EU money – about 93 mln euro – on “green” projects. These will include energy-management, waste-management and wastewater-treatment programs. EU money will also provide grants to small and medium-sized businesses. The idea is to foster innovation and help these enterprises increase their competitiveness.In recent years small enterprises’ “demand for financing from the EU has exceeded by three or four times the funds available,” said Andrzej Komanski, director of Regional Financing Institution of the Malopolska Agency for Regional Development.That may continue to be the case, but the EU’s signoff on the regional development plan means there will be a “continuation of financial support for entrepreneurs,” he said.The greatest beneficiaries of the EU money will be local governments – but the amount each will get has yet to be determined. They will have to come up with proposals for slices of the pie.An example of a community that has used EU funds wisely to develop its economy is Niepolomice.It used its last Integrated Regional Operational Program grant to convert part of a castle that dates to the Renaissance into a hotel and conference center.Adam Twardowski, head of the community council’s Office of Development Strategy, said Niepolomice would like to use any new grant money on new roads and modernizing the water and sewage systems.The community would also like to improve its flood-prevention system with an eye toward securing the Niepolomicka Industrial Zone.Community leaders believe those initiatives will attract new business to the area, creating more jobs. Together, the projects on Niepolomice’s wish list would cost more than 10 mln euro.Malopolska Province began working on its EU proposal in 2005. The Polish government signed off on the plan in February of this year.Then Polish officials began negotiating with EU officials in Brussels about the plan. The discussions ended two weeks ago.The finished document is now awaiting the signature of Danuta Hubner, the EU’s commissioner for regional development, according to Malopolskie Province spokeswoman Kinga Krason. The first competition among governments in the region for new grants is likely to come in September, Krason said.