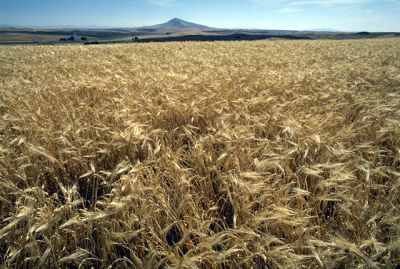 For years, the daily newspaper Gazeta Wyborcza reported, wheat prices have traditionally peaked when the previous year’s crop was being depleted and before the new crop was reported. The current high prices for cereal and grain products are the result of a below-average harvest in 2006-2007. One ton of wheat before this year’s harvest season was selling for 500-520 zloty. The price of this summer’s first wheat increased to 580 zloty per ton. Two weeks ago the price was 620 zloty; last week it hit 700 zloty.

Farmers are withholding their wheat from the market, believing that the price will continue to rise. Some Polish tradesmen speculate that at the end of 2007 the price will hit 1,000 zloty per ton. Because farmers had forecast very good wheat yields this year, nobody had expected the price to go so high. Usually, high yields mean lower prices.

The weather in Poland did not help farmers in the last few weeks, and the yields will not be as good as originally predicted. But the harvest will still be impressive, perhaps 24 mln tons, which is 25 percent better than in 2006. In fact, Poland’s harvest may be the best in Europe. To the south in Hungary, Slovakia, Czech Republic, Croatia, Greece, and Italy, crops have suffered under a hot sun. In France and Germany, rains have damaged fields. In Ukraine, the situation is so bad that government has banned exports of wheat. Arab countries, the main importers of Ukrainian cereals, must search for other sources of supplies, which will raise the price on the world markets.

Elsewhere in the world, only Argentina and the U.S. had good harvests. Not doing so well were New Zealand, Australia, China, India and Canada. In the European market, the biggest competitors for Polish wheat exports will be America and Argentina. Poland will have the price advantage, however, because of lower shipping costs. Expensive wheat will likely increase the price of flour. Specialists say it will go up about 15 percent. The price of flour in supermarkets has not changed yet because of long-term contracts. But as soon as contracts expire, the price will go up. The price of flour already has increased 25 percent in food processing plants, such as macaroni producers. It means that macaroni will soon cost more in Polish stores. And a baker from Krakow told Gazeta Wyborcza that the price of bread may go up about 30 percent.

Expensive grain also means expensive feed for pigs and poultry. Prices of pork and poultry already are rising. Wojciech Mojzesowicz, Poland’s minister of agriculture, says higher prices for cereals and food are the inevitable consequences of joining the EU as prices become aligned with other nations. However, he thinks that it is too early for the union alignment to have had an effect on the current Polish price increases. And grain prices may take another jump between December 2007 and February 2008. By then we will know how much wheat was sold abroad and how much has remained in Poland. Also in January 2008, Poland will begin production of biofuel. An increase in the demand for biofuel will cause an increase in the demand for grain and also boost prices, the European Commission said.