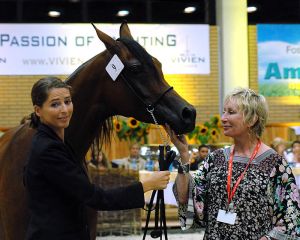 A new record was set at the annual “Pride of Poland” horse auction in Janow last weekend. The renowned Polish Arabian horses sold for a combined 2.6 mln euro. In recent years the auctions have become an important event for influential members of the the business community. Among the professional horsebreeders attending were Polish and foreign celebrities, musicians, actors, fashion designers, and even members of royal families.Attendees were eager not only to admire the chiseled Arabian horses, but to bid for a chance to take one home during the auction. Wife of Rolling Stones drummer Charlie Watts Shirley bought a stallion named Pieta for 300,000 euro – the highest price paid at this year’s auction. Among the VIPs and horse enthusiasts was the sister of the king of Jordan Alia, fashion designer Paulo Gucci, and actor Patrick Swayze and producer Mike Nichols. Polish TV celebrities Katarzyna Dowbor, Monika Luft and Andrzej Nejman were also present at the event. A number of the guests stayed in hotels in Warsaw and were brought to Janow via helicopter. Others chose to stay at nearby guesthouses. Dressed smartly, the guests watched as the horses paraded at the auction. A total of 33 mares and 2 stallions were up for auction this year.