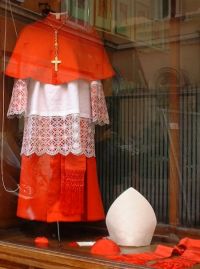 These were the words that Cardinal Jean-Marie Lustiger, longtime leader of the French Roman Catholic Church, used to describe himself. He could have added to that description: honorary citizen of Bedzin. Cardinal Lustiger, an adviser to the late Pope John Paul II, died August 6 in Paris. The 80-year-old churchman, the son of Polish Jews, had supervised the French church for nearly 25 years before stepping down as archbishop in 2005, the New York Times reported. The death of Lustiger, a Jewish convert to Catholicism, prompts a look at his unusual story. Born in France to non-practicing Jews from Silesia, young Lustiger converted to Catholicism when he was 14 during the Nazi occupation of World War II. Lustiger said he had read the Bible secretly and later said it felt like “reading something he already knew.” Lustiger was the only Jewish convert to Roman Catholicism to become a French bishop in modern times. The conversion brought both praise and condemnation from Jews. The head of the French Council of Jewish Institutions, Richard Prasquier, said Lustiger had always “shown a great fraternity towards his community of origin.” Chief Rabbi  Ashkenazi, however, publicly accused Lustiger of “betraying his people and his religion.” Lustiger, said to be hurt by the rabbi’s attack, has stated: “I was born Jewish and so I remain, even if that’s unacceptable for many. For me, the vocation of Israel is bringing light to the goyim (non-Jews). “That’s my hope and I believe that Christianity is the means for achieving it.” An undeniable fact is that throughout his Catholic life, Lustiger was a strong advocate of Jewish-Christian relations and did a lot to improve them. Cardinal Lustiger had many connections to Poland, particularly to Bedzin. His parents came from that city. The Lustigers lived in Kollataj Alee 34, near Bedzin cemetery. They immigrated to France at the beginning of the 20th century. Jean-Marie was born in 1927 in Paris, but he often visited Poland to see what had been described to him by his parents. Finally, he came to Poland to discover Bedzin on his own with his cousin Arno in 1992. They visited the old synagogue and ghetto. In 1997 Lustiger was made an honorary citizen of Bedzin. Arno Lustiger talked to his cousin three weeks before his death. “Jean-Marie recalled his last visit in Bedzin,” Arno told the daily newspaper Gazeta Wyborcza. “He said that was a special memory. We talked about all the streets, houses and other places we visited together. Very special and precious to him was the title he received from Bedzin citizens.” Cardinal Lustiger’s funeral was held August 10 at the Notre Dame Cathedral in Paris. In line with the cardinal’s wishes, ceremonies began with a reading of a Jewish psalm by Lustiger’s grand-nephew in Hebrew and French. The grand-nephew also carried a bowl of earth gathered from Jewish and Christian sites in the Holy Land. Before the crowd of around 5,000 people gathered on Notre Dame esplanade, cousin Arno led the reading of the Kaddish, the Jewish prayer for the dead. Poland was represented among the mourners: Primate Cardinal Josef Glemp, Cardinal Macharski and Archbishop Zycinski took part in the ceremony. Also present was former President Lech Walesa. Several cardinals and bishops bent to kiss Lustiger’s coffin before it was carried inside the cathedral, where it was to be laid in a crypt. As reported by Agence France-Presse (AFP), several prominent members of France’s Jewish community attended the funeral, but the top leaders were absent. Spokesman for the Jewish leaders said they did not attend because Lustiger’s conversion to Catholicism remains a sensitive issue.