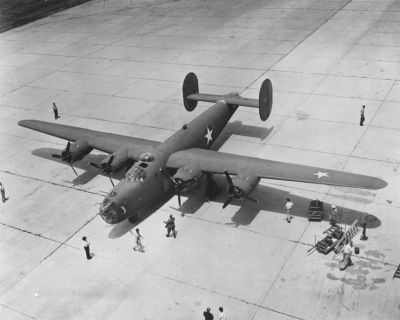 The Krakow Municipality is considering building a monument to commemorate a plane and its crew that perished after helping the 1944 Warsaw uprising fighters.On August 16, 1944, Liberator KG-933 (from the 178-RAF Bomb Squad), commanded by William D. Wright, was returning from a successful aid airdrop mission for Warsaw’s insurgents who had been fighting against the Germans since the uprising began on August 1. The plane was probably first shot down by a German fighter plane and then by antiaircraft artillery. It crashed in the Zablocie area, south of Krakow’s city center (where Schindler’s factory is located). Only Allan Hunter Hammet, an Australian pilot, survived the crash. After numerous tribulations, he managed to return to Great Britain safely.A plaque commemorated the heroic crew and their last flight at ul. Lipowa 18, but now the Krakow Municipality and architects from Krakow’s Institute of Technology want to erect a monument of the “Liberator” on the south bank of the Vistula River, opposite the Kazimierz Gallery Mall. The monument, to be named “Boulevard of Aliant Aviators,” would be placed near the original crash site and would become part of Krakow’s “Trail of Aviation History.” Institute of Technology student Arkadiusz Sordyla designed the monument as a skeleton-structured phantom of a diving plane, just before the crash. The design retains the plane’s original 32-meter width and will be supported by a frame entwined with specially chosen plants. Its pedestal shape was inspired by three aviation symbols: the Polish chessboard, the English bowknot and an American star.The entire project will include information plaques of heroic aviators who fought and died in World War II, a small museum of the war’s past events, a viewing platform and a stop for future river trams.”The municipal board has viewed this project and accepted it as achievable,” said Malgorzata Wozniak, a member of the municipal press office. “Although the project is very beautiful, we have to wait until after the holiday period, namely the beginning of September, to have all the details discussed and voted on. For now, the project remains only on paper.”