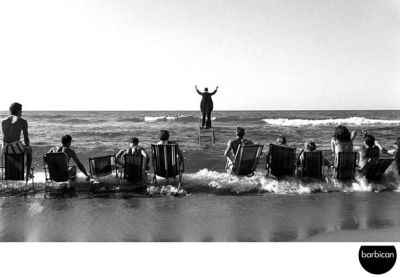 A photograph on a potato package has created an international incident. As reported by the daily newspaper Gazeta Wyborcza, the potato chips are produced by the British company Tyrrells. The photograph on the package is the famous “Panoramic Sea Happening” by the late Tadeusz Kantor, a noted Polish artist. Kantor’s heirs – his wife and daughter – and protectors of his art are indignant at the commercialization of the photo and call it “a profanation of art.” The use of the photo also may violate copyright law. Kantor’s “Panoramic Sea Happening” was created in August 1967 as the first part of his “Sea Concerto.” “Panoramic Sea Happening” shows a music conductor standing on a chair in the ocean, with his arms outstretched, “conducting” the waves and sounds of nature. The photograph was taken by Eustachy Kossakowski. How did the photo end up on the potato chip package? Gazeta Wyborcza said one of the Tyrrells employees responsible for the packaging was on vacation and unavailable for comment. But Gazeta Wyborcza speculated that Tyrrells decided that the photo would be a good illustration for the potato chip’s slogan “Lightly Sea Salted” on the packaging.

Tyrrells boasts of being “the only small UK chip maker to grow their own potatoes and process them into delicious chips on the farm, controlling the whole process from seed to chip, which takes 12 months.” Tyrrells products are sold only in natural food stores. The photo on the potato chips package was spotted in an English store by a colleague of Kantor’s daughter, and the alarm was raised. Kantor heirs say they never allow a company to use his art for commercial purposes.