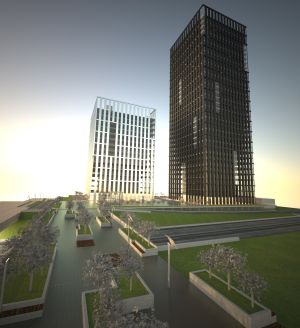 The Silesia Region has enjoyed a property-development boom in recent years.One of the largest developments is a four-phase housing, office and shopping complex in Katowice. The first phase of the four-year project was the Silesia City Center shopping mall, which opened in November 2005.The company that is developing the entire complex, Hungary’s TriGranit, built the shopping center over the old Gottwald coal mine. The architects designed it to preserve some of the historical character of the place. They includes the Gottwald’s old mining tower – the shopping center’s landmark – and fragments of old mining buildings in the project.Work is underway on the second phase of the complex, high-rise housing. The three apartment buildings will have 252 units. The size of each will range from 27 to 122 square meters.The project will include underground parking for all apartment owners and about 200 aboveground parking spaces for guests.Work on the third and fourth phases will begin in a few months. They will involve the construction of two office buildings on Chorzowska Street. Famed architect Stefan Kurylowicz designed the Silesia Office Towers. Kurylowicz, who uses cutting-edge construction techniques, has designed a number of Warsaw skyscrapers, including the Focus Filtrowa Building and the Polish Airlines Building, according to the newspaper Gazeta Wyborcza.The highest Silesia Office Towers skyscraper will join Altus as the tallest building in the region. The 34-story structure will be 125 meters high, the same as the 30-story Altus. The other building will have 15 stories and be 55 meters high. The two buildings combined will have 60,000 square meters of space.Janusz Olesinski of TriGranit said the two buildings will accommodate about 6,000 workers. TriGranit will begin this week to try to line up tenants, he said. “Whether we finish both towers at the same time or in stages” depends on potential tenants’ interest, he said.”It is possible that by the end of the year 2009 we will have finished only one tower, the higher one,” he said.He also said TriGranit is considering connecting the office towers and adding retail space to them. The whole complex, with a square and green space, is sure to be a major attraction for Katowice and the entire Silesia Region.