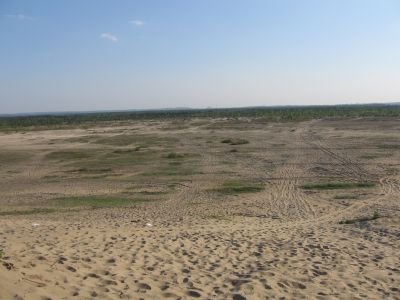 Pustynia Bledowska has long been Central Europe’s largest desert.It is also Poland’s largest area of sand dunes away from salt water.Those two claims to fame make it worth preserving. But the sandy area between Klucze, Chechlo and Bledow is shrinking because vegetation has either been planted there or has taken hold naturally.The desert is only a fifth as large as it was a few hundred years ago – 32 square kilometers today against 80 at the beginning of the 19th Century and 150 in the distant past.Polish naturalists know that if something is not done, it will disappear altogether. That’s why they have drawn up a restoration plan that includes a timetable for the work, the newspaper Gazeta Krakowska has reported.Local officials have come aboard the naturalists’ efforts by putting together an association of the region’s communities as a support group. The national government would actually direct the restoration work. The EU, wanting the desert to remain one of the sites listed in the Nature 2000 Network, has pledged money to restore it, according to Radio Katowice. A glacier left the Bledowska Desert in its wake when it melted thousands of years ago, according to the Internet encyclopedia Wikipedia.The depth of the desert’s sand averages 40 meters. In some places it reaches 70 meters. The overall formation is 9 kilometers long and 3 to 4 kilometers wide.   As late as the 1960s you could still see such major desert phenomena as oases, sandstorms, sand swirls and mirages in the desert.During that decade, however, farmers decided to plant Caspian willow along the edge of the desert to keep sand from blowing onto their land.Once the long-leafed violet willow took hold, it quickly overran other areas of the dunes.   The Nature 2002 Network listed the Bledowska Desert as one of the sites that should receive special protection to preserve its unique character.Members of the Polish Sahara Association and of the Polish Academy of Sciences in Krakow decided to team up to save the desert, the Polish news agency Polish Press Agency (PAP) reported.Marian Pajdak, head of the Nature 2000 Network, said the organization added 50 areas this year to its list of sites that ought to be preserved. Four are in the Malopolska region – the Bledowska Desert, the Nature Complex in Jaroszowiec, the Small Pieniny Mountains in Podhale and the Bialka Valley in Podhale. Pajdak said naturalists want to see vegetation stripped from the southern edge of the desert and the weeding out of plants that took root on their own in other places in the sand. They also want to see steps taken to prevent the pristine dunes in the north from being overrun.Pajdak said “the first effects would be visible in five to eight years’ time.”