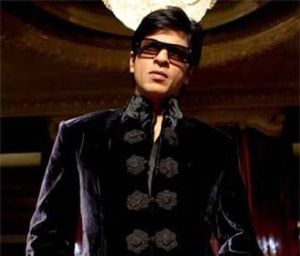 Absurd as it may sound, the new Indian production “Don” directed by Farhan Akhtar is a rather bad film, but a fairly good Bollywood film. That is to say, adhering to the criteria that a Western film critic takes with him to the cinema, the film has nothing in particular to offer, but then any sensible critic knows that these same criteria have no place in Bollyworld, and that one has to start from different presuppositions. What are these presuppositions, then? Everything must happen very quickly, the plot must twist back and forth and then come lunging at you like some crazed jack-in-the-box, and logical cause-and-effect relationships between scenes are suspended and replaced by whatever is visually intoxicating. I may not understand why the protagonists are suddenly singing and dancing, but sweet Jesus just look at that sparkling dress and isn’t that a catchy tune. And so on for nearly three hours(!). The Bollywood formula is fairly well known by now, having established itself worldwide and become a veritable cultural phenomenon in Great Britain among other places, and “Don” does not attempt to depart much from the tried-and-true formula. So here we have a standard gangster plot with charismatically mugging lead actors, and every twenty minutes or so everything stops and there is a long song and dance routine. Having said that, the plot here is more complex than usual. The first ten minutes give us a very involved exposition in the form of a police-station briefing, but from then on the protagonists and antagonists switch places and are undermined every ten minutes, so that plot twists become the status quo, until the very end, when it turns out the viewers have in fact been tricked during the whole film. This narrative schizophrenia is reflected by the camera work – the camera darts about like an angry wasp, and sometimes one’s head spins trying to read the subtitles and follow the action simultaneously. Added to all this is the kind of Indian hyper-kitsch that only a big budget can fully allow. The women almost always have wind machines blowing back their immaculate hair-dos, when the criminal protagonist pulls off a maneuver a breathless female voice whispers “Don…Don…Don…Don” into an echo-microphone from somewhere off-camera, and a mid-air grapple for a parachute near the end is perhaps more preposterous than anything James Bond has ever had to pull off. The lead actor has to produce idiotic one-liners like: “My enemies’ greatest mistake is being my enemies.”English-language viewers will also find the spoken text quite humorous. The language of the film is Hindi, of course, but practically every sentence has a sprinkling of English, especially when the character would like to say something cool or tough. Thus a Hindi statement will conclude with “And keep the change” or some other English phrase, simply because this presumably sounds cool to the Hindi ear. This happens with such frequency that I believe an English viewer could watch this film understanding neither the spoken Hindi nor the Polish subtitles.But I started off by saying this was a good Bollywood film, because at three hours long it is simply remarkable that a film critic with such low expectations could be so stupidly entertained. I believe I smiled through almost the entire film. And one of the unquestionable virtues of Indian popular culture is how seamlessly and unironically it incorporates traditional culture. At one point there is a massive dance scene with the protagonist heading a religious procession of hundreds of men and women dressed in traditional costume and banging on tablas, but not to wink and make fun of this tradition, simply because they seem to like it. Coming from a culture where mindless popular entertainment pits itself violently against tradition, this reconciliation is strangely touching and, I believe, instructive. Ultimately, of course, if you do go to see this film then you can expect brainless entertainment of the highest caliber for three hours, and you can expect to be astounded at how adamantly, beautifully different Indian culture remains in this allegedly globalized world of ours. But please, don’t tell anyone I told you to go see it.  “Don” is playing a limited engagement at Pod Baranami Cinema on Rynek Glowny.For more info: www.kinopodbaranami.pl