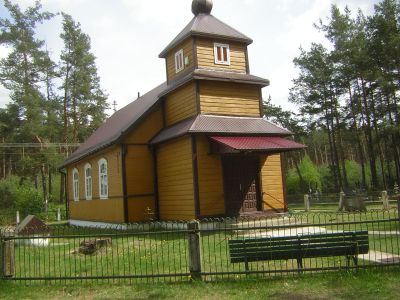 Bialostocczyzna is widely known as one of the most beautiful regions of Poland. The forests and wildlife are good reasons to visit this area of northeastern Poland. Another reason is the Orthodox landmarks. Many people may be unaware that the area continues to be the home of many Orthodox people. And so we begin the tour… A good place to start the journey is in Sejny, a small town with an interesting and complicated history. Catholics, Jews, Evangelicals and Orthodox live together, but not always in harmony. The Borderland (“Pogranicze”) Foundation in Sejny is a good source of information for this area and has a web site: www.pogranicze.sejny.pl. The foundation is devoted to building bridges between the people of different religions, ethnicities, nationalities and cultures.The foundation also has a delightful library with many informational movies. Sejny, Suwalki and Augustow are three towns where you can look for a special kind of Orthodox group – Old Believers. The history of this group of people began in 1652 when Nikon, the seventh patriarch of the Russian Orthodox Church, instituted some church reforms. Old Believers didn’t agree with the changes, and to this day they continue liturgical practices which the Russian Orthodox Church maintained before the implementation of these reforms. The Old Believers’ defiance brought persecution by the church, and they fled to Poland. The biggest group now lives in Gabowe Grady. At first glance, you can see a lot of differences between Old Believers and other Poles. Old Believer women wear long skirts, and the men never cut their beards. They fast for many days. They also do not drink tea or smoke. The reason, as one of them told me: “When Jesus died, all plants died, too, except for two. Tea and tobacco bloomed.” Travel through Bialostocczyzna reveals many small and beautiful Orthodox churches from the 18th and 19th centuries. Some of them are almost all blue, which means they are named after angels. In cities such as Bialystok, Bielsk Podlaski and Hajnowka, you will see more modern churches. Some are huge, looking like apartment buildings. Old or new, all Orthodox churches have domes. The number of domes on each church has special significance: One means one’s God, two is the nature of Jesus and five signifies Jesus and four evangelists. Also worth noting are the icons inside the churches and the legends that accompany them. World War II destroyed many Orthodox landmarks. Only one monastery has remained in continuous operation in Poland since ancient times – Saint Onufry Monastery in Jableczna, which dates to the 15th Century. The Saint Mountain Grabarka monastery for Orthodox women was founded after World War II, but the mountain was a landmark for Polish Catholics for a long time before. A fountain there is reported to have saved people from an 18th Century epidemic. The people who were saved began to carry crosses. Today more than 10,000 crosses adorn the mountain, giving it a second name: The Mountain of 10,000 Crosses. A third interesting site is the rebuilt monastery in Suprasl. Here you can visit the Museum of Icons. Some of the almost 300 icons date to the 18th Century and are displayed with special lighting and Orthodox music. You can also learn how icons are made. Another place to learn about icons is the Post-Secondary School for Making Icons in Bielsk Podlaski. The school founded by Father Tofiluk is the only one of its kind in Poland and accepts Catholic students as well as Orthodox, as long as they are believers. Icons are considered a form of Orthodox prayer, and so is music. No instruments are used, only voices. In May, the town of Hajnowka hosts the International Festival of Orthodox Church Music. The choirs come not only from Poland but from throughout the Orthodox world.