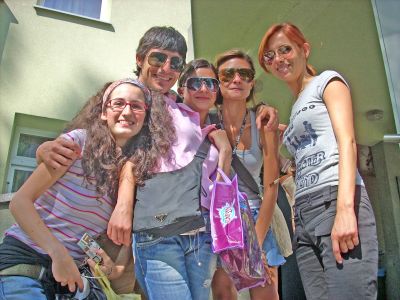 Krakow universities rent their dormitory rooms during summer vacation – and make good money out of it.Using dormitories as cheap hotels during summer has been a common practice in many European cities – for example, Prague. Krakow, with an abundance of universities, has thousands of dormitory rooms available. They range from hostel-like shared facilities to private rooms.Those who want to spend as little as possible, or get a taste of a student’s life, can choose a room with a bathroom that is down the hall or shared with another room.These cheap rooms typically feature bunkbeds. The only television is in a common television room.Price of the cheapies is about 25 zloty a person.The average price of a private room is 50 to 60 zloty.The “ritziest” private rooms, which have a bathroom, a TV, a telephone and a refrigerator, go for about 100 zloty.The biggest purveyor of dormitory rooms in Krakow is the Mining and Metallurgy University (AGH). It has thousands.Its 15-story dorms are visible from far away. For that reason, it hangs banners on them advertising rooms. It also advertises on the Internet.”We have a standard similar to a hostel,” said Andrzej Sabuda, substitute director of the AGH campus. “We advertise as the biggest and cheapest lodging place in Krakow. We can host as many as 4,000 at one time.”Most Krakow students are happy that their rooms are rented in summer because their universities use the money to keep students’ room rates steady and to improve the dormitories.When the students return in the fall, the university does not rent rooms to outsiders, Sabuda said. “The students are most important,” he said.Other universities also have some rooms to rent all year long. One is Jagiellonian University, Krakow’s most prestigious higher educational institution.”We have all-year-round hostel-type rooms in our dormitories,” said Marta Muszanska of the university’s Bratniak association. “They are of much higher standard than other lodgings of this type.She said the university carries out its “advertising campaign all year long, so we don’t have to fight for customers before the start of the summer season. Presently our business is very good. We don’t even need an Internet reservation service. We even plan to launch a frequent-customer card to entitle our guests to discounts.”Both universities’ offerings appeal to a range of customers – of all ages and many  nationalities.”Of course everybody wants to have as many customers as possible, but we don’t fight,” said Muszanska. “Competition always results in raising the standard, which is the most important thing.”Despite the demand for dormitory lodging, regular hotel and hostel owners aren’t panicking.”Of course we take the competition into account,” said Szymon Tokarczuk, owner of the Kadetus hostel on ul. Zwierzyniecka. “But in fact, Krakow’s hostels standard is one of the highest in Europe, one we may be proud of.” He also contended that “dormitories will never be able to create that homelike, private atmosphere that hostels do. And our service, the help we offer, is unavailable in dormitories. His conclusion: “There are enough tourists in Krakow” for all those offering lodging.