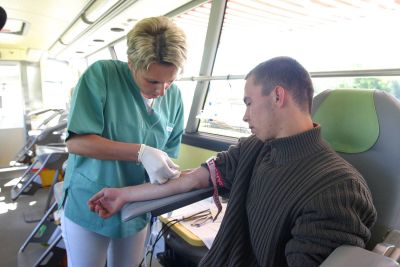 Residents of Zgorzelec, a Polish city on the German border, are traveling to the neighboring German city of Gorlitz to donate blood and plasma. A few months ago, a Haema blood donation center, one of 15 such facilities, opened in Gorlitz. Haema is a company that buys blood and plasma to resell to Austrian companies for medical uses. Half of the donors in Gorlitz are Poles from Zgorzelec and neighboring cities.

At first glance, nothing seems alarming about the situation. But transactions are not always as noble as they seem, and some Polish politicians are critical of the German business and a resultant decline in blood donations on the Polish side of the border.

Haema pays people for the blood donations. For 500 milliliters of blood, the donor gets 20 euro. For 750 milliliters of plasma, 15 euro. Blood donation by an individual is limited to a few times a year, while plasma can be donated up to 36 times a year. If a person provides plasma twice a month, he can get another 5 euro. Haema also rewards a driver who brings other donors to the company (15 euro for each one). In Poland, no money is paid for blood. The donor receives only a few chocolate bars, coffee, sometimes a meat can as compensation for nutrition losses.

Poland is not alone with this policy. Since 1975, the World Health Organization has asked its member states to conduct only voluntary and non-remunerated blood donations. Donated, no-pay blood is considered the safest. And not everybody can become a blood and plasma donor. Medical history is considered and doctors interview potential donors.

The blood-for-money business in Germany has angered some Polish politicians. Konrad Szymanski, an MEP from the Law and Justice Party (PiS), has lodged a complaint against Haema to the European Commission. But the EC maintains that the German enterprise doesn’t pay for blood donation but only compensates for time losses (a plasma donation takes about two hours) and for travel to Gorlitz. Even if Germans can consider 15 or 20 euro as a compensation, for some Polish citizens it has become an easy way to earn money. That is why they prefer to donate blood in Haema rather than in Poland.

The number of donators on the Polish side of Zgorzelec continues to decline. Of course there are many different motivations behind donating. But blood donors interviewed by the daily newspaper Gazeta Wyborcza admit that beside the idea of helping other people, they think about earning money, too. Some of them are saving money for holidays, some to buy a car, others to buy clothes, beer or other pleasures. Some of them have never donated blood in Poland.