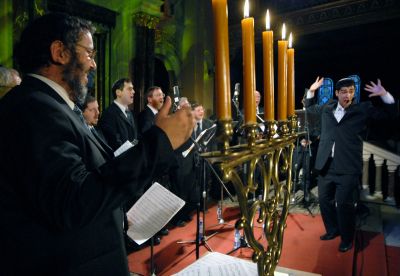 More and more Poles of Jewish descent are joining the Progressive Jews community in Poland, Dziennik newspaper reports. Getting much of the credit for the movement is the Beit Warszawa Jewish Cultural Association in Warsaw. The association aims to revive the tradition of Progressive Judaism, which was active in Poland before World War II. To attract Poles to Progressive Judaism, the association organizes courses in Hebrew and Yiddish, as well as lectures on Jewish religion and culture. About 200 Jews belong to Beit Warszawa, and each year this number increases. Active communities of Progressive Judaism exist not only in the larger Polish cities, such as Krakow and Gdansk, but also in smaller communities like Bilgoraj and Zielona Gora. Beit Warszawa was founded in 1999 by American Severyn Ashkenazy as a home for the Progressive Jews community in Warsaw. It has been the only spiritual and cultural center for Polish liberal-minded Jews. Their rabbi is Burt E. Schuman, a New Yorker with Polish roots. Members of Progressive Judaism view Jewish laws as adaptable to the changing needs of cultures over time. As a result, they look to the Bible for basic moral principles, but they do not believe in a literal reading of the Bible. So they ignore some rules important for Orthodox Jews, for example about kosher food or clothes, which they find outdated. Progressive Jews are also more socially liberal than many Orthodox congregations. For example they have a more relaxed attitude towards homosexuality and other controversial issues. According to their rules a Jewish identity can be passed down through either the mother or the father. The origins of Progressive Judaism go back to “Haskala,” the 18th-Century Jewish Enlightenment developed among Jewish intelligentsia and bourgeoisie. Haskala?s followers supported “cultural assimilation,” which included the use of local languages in religious offices, the secularization of education and a growing role for women in religious practice. One of the most famous Haskala supporters in Krakow was Jozef Oettinger, the first Jewish lecturer at the Jagiellonian University. In the 19th Century, Progressive Jews were often the objects of attacks by Orthodox and Hasidic communities. Today the ideas of Progressive Jews continue to be rejected by Orthodoxy. Progressive Judaism is perceived by Orthodox Jews as a breach of Jewish law and ethics and is treated as a foreign religion. However, the number of Progressive Jews is growing throughout the world. In the U.S., 60 percent of Jews belong to Progressive communities. In Poland, Progressive and Orthodox Jews face another problem – worship space. The regained Jewish properties, such as synagogues or prayer houses, belong to the Orthodox community. In the face of the growing needs of the Progressive community, which currently rents a house in Warsaw, this issue will have to be resolved soon.