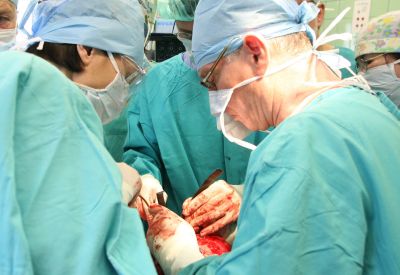 Surgeons at Rydygier’s Hospital in Krakow recently carried out an unusual operation. A resident of Sucha Beskidz-ka cut off his penis with a knife, and the surgeons reattached it. The reason why the patient cut off the organ remains unknown. During the reattachment operation, which took about seven hours, the surgeons rejoined the severed arteries, veins and nerves. The key factor contributing to the success of such kind of operations is time. Thanks to the swift operation by the surgeons only two hours after the 30-year-old man cut off his penis, there is a good chance that the organ will be functioning properly after the operation. In addition, before being transported to Krakow, the organ was put on ice and heparin was injected into it at the hospital in Sucha Beskidz-ka to prevent the blood from coagulating. As reported in the newspaper Dziennik, Dr. Marek Wyczolkowski, the head of the oncological ward of Rydygier’s Hospital in Krakow, said that success in restoring sexual potency to the patient would not be determined for a couple of weeks. He said there was an 80 percent possibility that the surgery would be successful. That estimate is impressive because medical history for this kind of surgery is practically nonexistent and no operation of this sort has been performed for 30 years in Krakow. What is not so comforting is the price of the operation: The National Health Fund will have to pay 5,500 zloty to Rydygier’s Hospital for the surgery, the newspaper Gazeta Wyborcza reports.