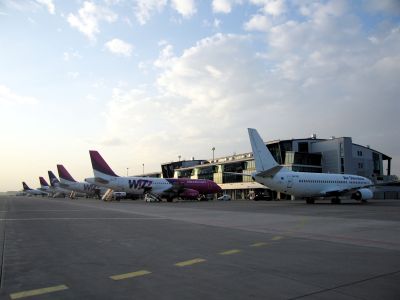 Last week Hungarian low cost airline Wizz Air announced the launch of a Katowice-London Gatwick flight on January 31, 2008. Gatwick will be the third direct flight destination in London – following Luton and Stansted – from Katowice International Airport. The new route will operate daily in the afternoon. Wizz Air is increasing its number of routes to 25 with the new connection from Katowice, further reinforcing its status as Silesia’s leading airline. The airline offers the most flights and flying routes from Katowice. The airline is also introducing a fee for all checked-in luggage that will apply to all passengers with reservations for flights after October 27. Passengers checking in luggage must pay 3 euro per bag at the time of purchase or 6 euro if paying later (via call center or at the airport). The new check-in policy will neither affect the carryon maximum weight limit of one 10 kilogram item nor the extra check-in 8 euro fee for each kilogram exceeding the 20 kilogram maximum weight allowance.”We are pursuing our philosophy of charging the passengers according to their needs and we are using this change to keep our airfares down. Passengers who will only travel with carryon luggage will benefit with even lower fares. At the same time, less checked-in baggage will further increase the operational efficiency of the airline that will help us to maintain and further improve our on-time performance,” said Head of Corporate Communication and Public Affairs Natasha Kazmer. Wizz Air airline was conceived in June 2003. The first flight took off on May 19, 2004 from Katowice. Today the airline has six operating bases in Katowice, Warsaw and Gdansk (Poland), Budapest (Hungary), Sofia (Bulgaria) and Bucharest (Romania), offering flights to almost 50 destinations. Wizz Air opens its seventh base in Poznan in January 2008.Katowice airport is getting busy, as “Lufthansa,” the German flag carrier and sixth largest airline in the world, is also boosting frequency of flights from Katowice to Dusseldorf (Germany). Beginning September 1 the airline will increase its flights from 5 to 6 per week, after adding a Saturday flight.