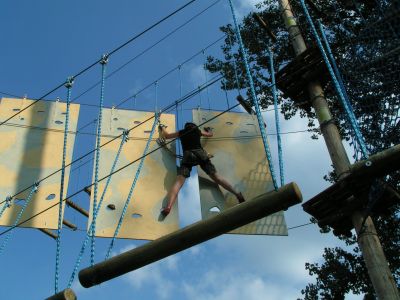 A rope park is the newest attraction for thrill-seekers at the Chorzow Amusement Park. The “Palenisko” rope park is opening just two months after a roller coaster made its debut at the park 80 kilometers from Krakow in southern Poland.

The rope routes welcomed their first visitors on Monday, August 13, but the official opening is planned for today, August 16. If interest is strong enough, an altitude obstacle path will be open the entire year, the newspaper Gazeta Wyborcza reported.

The Chorzow Amusement Park is one of the most popular in Poland, with an estimated 1.5 mln visitors each summer. The amusement park is one of many attractions in the Silesian Central Park. Others are: Silesian Stadium, the biggest sports stadium in Poland; Elka, the longest European cable line railway; the Silesian Planetary and Astronomical Observatory; the Upper Silesian Ethnographic Park; International Katowice Fairs; the Zoological Garden and other sports complexes.

The rope park is situated between the Silesian Stadium and the Zoological Garden and cost an estimated 450,000 zloty (120,000 euro). The rope park includes 26 wood poles, each 14 meters high, linked by steel ropes with 43 obstacles installed on them. The park has three different skill levels and professional guides. The various degrees of difficulties give people a chance to measure their agility and fitness in a new and unexpected way. The lowest degree of difficulty allows even small children to cross the route at a 3-meter height. The second route is for adults, with the platforms 6 meters high. No special abilities are needed for this line, but it demands and promotes agility, concentration and determination. The third route is the extreme one. Some obstacles hang 12 meters above the earth. “This is only for people who have very strong hands and arms,” said Wojciech Sieprawski, chief of Trance-Blues Co., the park builder. “It finishes with over 90 meters of Tyroliennes (cable pulleys).”

Before attempting the rope walks, park staff members give safety advice. Walkers are attached to the steel ropes and are observed by experienced climbers ready to give assistance if needed. Ticket prices range from 15 to 30 zloty, depending on the route difficulties.