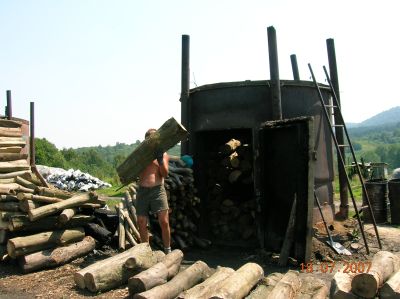 People have used charcoal throughout the ages. Science, technology and art owe their development to this material, having ranged in use from the earliest cave-painting art, to contemporary art, fuel, military gas masks and the development of alimentary canal medicine. Modern cast-iron wood carbonizing is extensively practiced where wood is available in large quantities. The largest number of Poland’s “wypalarnie,” wood burning factories, is in southeast Poland’s Bieszczady Mountains.”Here in Bieszczady we have enough wood,” says Mieczyslaw Tymczak from one of the factories. He and his coworkers are called “weglarze” (“coal-workers”). “I’ve been working for more than 20 years in this field, just as my father did.”Everyday he takes wood from a pile to the furnaces. Each piece of wood weights a few kilograms, requiring significant body-strength to lift the pieces hundreds of times. It’s not easy to fill up 10 containers with a capacity of a few cubic meters. “Every type of leafy wood can be used,” Tymczak says. “Oak, Alder, Birch tree – we put it inside until the furnace is full.” Each furnace has four small chimneys for the smoke to get out and an opening through which the wood is inserted. To burn such large quantities of fuel, oil is spread over it to make it ignite faster. The temperature of carbonization is important; according to specialists, wood becomes brown at 220 degrees Celsius, a deep brown-black after some time at 280 degrees Celsius, and an easily powdered mass at 310 degrees Celsius. Charcoal made at 300 degrees Celsius is brown, soft and friable, and readily inflames at 380 degrees Celsius; made at higher temperatures it is hard and brittle, and does not fire until heated to about 700 or even 800 degrees Celsius.The process has to be observed so that the wood doesn’t burn too quickly. A fragment of Arthur Ransome’s book, “Swallows & Amazons,” from 1930 describes this: “We want ours to burn good and slow,” said Young Billy. “If he burns fast he leaves nowt but ash. The slower the fire the better the charcoal.” “To make one kilogram of charcoal you need around five kilograms of wood,” says Tymczak. The process takes about 24 hours but has to be watched carefully. “The two of us sleep here.” Indeed the workers have two poor shelters on the glade surrounded by forests. It takes a lot of courage to sacrifice so much for work. “It’s a 24-hour job because the fire is no joke,” Tymczak says. “You have to be born to do this job.”When the smoke changes from white to blue, the burning is finished. The charcoal’s extreme temperature makes it impossible to take out immediately. “We pour as much as 100 liters of water on it, using only buckets, and we wait hours so that it?s cold enough,” Tymczak explains. Later, the trucks take the charcoal to the sorting plant where it’s packed and sent to other regions in Poland, foundries or Germany.In the past, massive production of charcoal has been a major cause of deforestation, especially in Central Europe. In some parts of Scandinavia, charcoal was thought to be the by-product of wood tar production that had led to rapid deforestation. All Finnish forests are estimated to be younger than 300 years old. The end of tar production in the 19th century also allowed for rapid forest re-growth.Nowadays, ecologists are concerned about the environment because primitive methods of coal burning contaminate air, water and soil, and emit substances harmful to humans and the environment.The burning process emits high amounts of a particular wooden gas that contains carbon dioxide, carbon monoxide, ethane and hydrogen. The pitch can also get into waters and the ground. Many Polish ecological organizations have created a list of precautions aimed at impeding pollution of groundwater, surface waters and the environment in general. Wood burning furnaces are usually situated far from villages so that the emission of gasses would not harm nearby residents.The charcoal from Bieszczady is used in Poland and sent abroad, as well. “It’s a pity our environment suffers. We send the charcoal to Germany where it’s used but we burn it on our ground,” worries Tymczak.