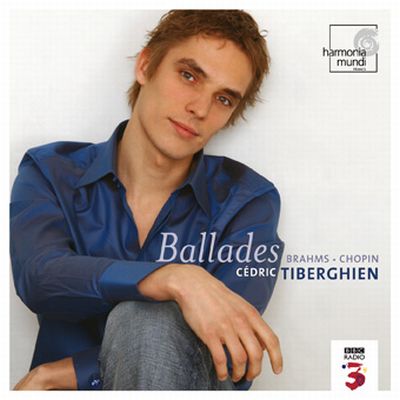 Cedric Tiberghien: New talent and interpretation in Harmonia Mundi recording of Chopin: 4 Ballades; Brahms: Ballades op.10
Chopin and Brahms’ Ballades, written during the peak of Romanticism, are exceptionally demanding compositions. They pose a great deal of technical and interpretive challenges for pianists despite the extensive room for personal interpretation in the rhapsodic forms. Cedric Tiberghien is among the most promising young pianists emerging from France in recent years. He released his fourth solo album after three recitals of Bach (“Partitas”), Debussy (“Estampes,” “Images”) and Beethoven (“Variations”) with the well-known French label “Harmonia Mundi.” The 2005 recording of three of Bach’s “Partitas” reveals Tiberghien as an intriguing new talent. The young pianist exhibits great sensitivity in his playing and an ability to skillfully combine poetry with energetic playing. The arrangement of the pieces is highly original. The album begins with Chopin?s Ballades op.23 and 38, follows the Brahms cycle of Four Ballades, op.10 and ends with Chopin’s Ballades op. 47 and 52, two of the most complex and sophisticated pieces in piano repertoire. Tiberghien commences the pieces vigorously displaying technical virtuosity from the first bars. His playing is clear and precise and the performance of Brahms is charming even without the gloomy and mysterious atmosphere that Benedetti Michelangeli conjures up in his unrivaled 1981 recording. Unassuming, open, frank and contemporary, Tiberghien’s interpretations of Chopin (particularly Ballade No.3, op.47) are very different from the highly personal and individualistic creations of Arrau, Magaloff or Rubinstein.