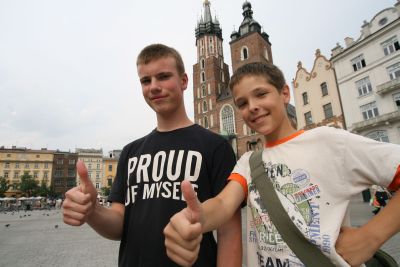 It appears Krakow treats its residents well. With its rapid economic expansion, new developments, cultural events, historical riches, influx of foreign travelers, job opportunities and a welcoming atmosphere, Krakow is appreciated by the people who live in it.The results of a recent Urban Audit Perception Survey for the European Commission have revealed that Krakow is second on a list of European cities with most content inhabitants. Second only to Groningen in The Netherlands, Krakow is full of optimists who value the quality of life their city offers them. The survey conducted in November 2006 was published recently with surprising results. The survey measured the local perceptions of quality of life in 75 EU cities, including Croatia and Turkey. Five hundred randomly selected persons from each city were asked a series of 23 questions, dealing with the quality of life. Respondents were selected from various parts of each European city. The Perception Survey was carried out to compliment the data already collected for the main Urban Audit Perception Survey, which has collected over 250 indicators on the quality of life in 258 EU cities and in Turkey.Krakow scored higher contentment ratings, above iconic cities such as Paris, London, Prague and beautiful towns like Malaga. More than 75 percent of local Krakowians surveyed expressed high satisfaction with their city. The survey took into account all capitals of EU countries, with the larger member states having up to 6 cities included. Polish cities included Gdansk, Bialystok, Warsaw and Krakow. Gdansk secured the 9th position in the contentment ratings. Istanbul, Naples and Athens scored the least favorable ratings with less than 25 percent of the inhabitants indicating contentment. The more specific questions within the survey dealing with city pollution, public transport, housing costs, health services and unemployment, leave Krakow looking a tad more bashful. The question “is it easy to find a job” saw Krakow drop down to the 32nd  position, beaten by Warsaw (20), Bratislava (7) and Prague (1). However, it appears that Krakow is also foreigner friendly taking the 5th spot when it comes to foreigner integration. Air pollution in the city is a worry with Krakow residents displaying their disappointment placing the city in the 48th position, outranked by Vienna (14), Groningen (1) and Poland’s own Bialystok (2). In terms of green areas such as public parks and gardens, Krakow again does not score too favorably at 36, behind Warsaw (30), Bialystok (8) and Malmo (1) in Sweden. Nonetheless, the general optimism for Krakow is strong. It is not surprising the city is so well received. Aside from the 8 mln tourists who visited Krakow in 2006, the locals know themselves the city is an easy place to live in. With its close proximity of pubs, restaurants, schools, universities, cinemas, fruit and veg markets, shops, clubs, libraries, galleries, cafes, concert halls and theaters, the average local knows he or she is lucky to have everything on hand. The Dean of Philology at the Jagiellonian University, Prof. Swiatkowska says it is the dynamism of the students that adds to the contentment of its residents. “The campus is located in such close proximity of Rynek Glowny with its 200,000 students and this creates the liveliness Krakow is so known for. It is not just the tourist giving the city the vibe.” she claims. “But it is also a familiar city, small enough to retain local friendships. It is a true stereotype when people say that on a Sunday you can see all your acquaintances in Rynek Glowny,” Swiatkowska laughs. This indeed is an element of authenticity of the town and a source of its pride, slowing its pace considerably to that of Warsaw or even Wroclaw.Marcin Bober an internal control analyst, came to Krakow 8 years ago as a student and decided to stay, claiming the city “combines perfectly traditional elements with modern development, as well as being the socio-cultural hub of Poland.” According to him “everyone knows that Krakow has the most to offer when it comes to leading a rich social and cultural life,” and that, most would argue is what makes the locals so content. It also helps to have the opinions available from the foreigners and the expats who arrive to this city. They are able to point out the cities advantages and disadvantages leaving local Krakowians appreciating the place that they are living in even more, as well as providing food for thought and eventual improvements. A city with vast contrasts Krakow provides its residents with an air of authenticity no longer available in some overly commercialized cities centers of Europe, and that is what draws people to it.