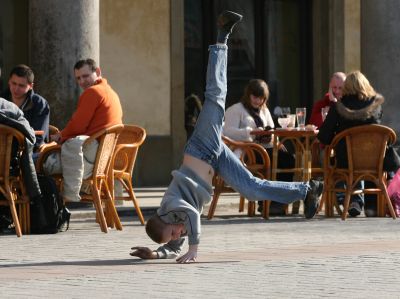 Is there a big problem with young kids begging or busking for money in Krakow? According to the Municipal Council there is. In the sweltering heat of the Polish summer, Krakow is not only swarmed with tourists but with “street kids” trying to make a quick buck out of the peak season. City officials view this as a fundamental problem that is being propagated by the adults themselves who are willingly handing out money to such children, in turn demoralizing them. For this reason, the Municipal Council has commenced a campaign to discourage such children as well as the adults who clap along to their performances. The “By Giving Them Money You Take Away Their Childhood” (Dajac pieniadze odbierasz dziecinstwo) campaign lead by the youth officer Father Augustynski for the city, wants to see these children back in their playgrounds enjoying the holidays. A total of 600 pamphlets will be distributed this week in Polish and in English around Krakow’s restaurants and cafes discouraging adults from giving children money. Such pamphlets will be placed on cafe and restaurant tables around Rynek Glowny, particularly in the beer gardens. The city police and municipal guards will be sent out to stop such behavior and performances. But what is so demoralizing about a healthy dose of initiative and the early signs of private enterprise? Surely the young violinist boy in his baroque get up and classical fingertips cannot be slummed into the same category of a church-front beggar? “This is how we make our pocket money,” says one young ambitious dancer dressed sharply to impress the audience. A lot of effort goes into his performance. “We are not targeting the holiday busking children who with the support of their parents perform well-orchestrated acts. The campaign is aimed at those children who walk around  Rynek Glowny, among the cafe tables, with outstretched hands asking for money for cards that they have drawn,” Father Augustynski told The Krakow Post. “We are concerned about the children who do poor ‘break dancing’ performances in front of tourists sitting and eating their meals, who then enter the beer gardens and collect money from the onlookers claiming they need the cash for books or the like.”It is estimated there are over 100 kids in Krakow from the ages of 8 to 14 busking or asking for money. From impromptu break dancing to playing classical instruments, they are out earning a good penny. “I ask parents the most vital question of all: would you like your 8-year-old to be out on the streets making hundreds of zloty per day? The answer is always ‘no,'” Father Augustynski underlines. “It is for this reason that we must adhere to the standards of the civilized world, adhere to the standards of the European community ? as citizens we must encourage non-governmental social organizations to help in such community problems. We must not fix the problem ourselves by handing out money.” One only needs to look to the audiences? reaction to see the dichotomy of opinions when it comes to this problem. “British and other foreign tourists are much more relaxed and enjoy the dancing performances. They clap along and sometimes even dance with the kids giving them big ‘tips’ as rewards. The Polish customer however hates being bothered and will often ignore the young buskers,” says Basia Bielecka, a waitress at the popular Piano Roz on Rynek Glowny. “The kids can get aggressive though, especially the card sellers. They throw around verbal abuse until they get the desired money and then leave your table alone. We haven’t seen much municipal guard patrol rectifying this problem.” If the campaign is successful this will soon change. “The problem exists if the kids continue to receive money. We stop giving them money, the kids stop begging,” says Father Augustynski. The deeper-rooted problem with poverty continues however to remain untouched.