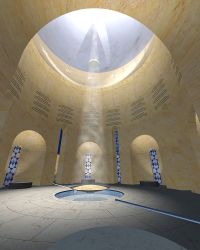 The American Sacred Grounds Foundation wants to erect a Holocaust monument and a sanctuary on the site of the Auschwitz concentration camp. According to Gazeta Wyborcza, any construction within the grounds of the camp or its vicinity is forbidden by the Auschwitz-Birkenau museum authorities and by the International Auschwitz Board.The concept of the monument is to reflect a symbolic burial ground for those who died in the concentration camp. The foundation wants to place a large circular tower surrounded by a wall in the centre of the camp. The wall will have the names of the departed chiselled into it. The dust from the chiselling will then be placed into “the spirits’ well” a structure incorporated into the tower. This in turn is to symbolize the burial of the Holocaust victims. Little is known about the Sacred Grounds Foundation, located in Miami Florida. Amongst its honorary members are the Italian Archbishop Luigi Accogliego and Miami Mayor David Dermera. The structure of the monument and the sanctuary is designed by the Sieger Suarez Architectural Partnership in Miami.The cost of the project is estimated at $29 mln. The International Auschwitz Board, however, is not keen on the project. Auschwitz is considered to be a cemetery today and Judaism does not permit any monument erection within the grounds of a cemetery. The foundation is keen to discuss an alternate place for the construction with the IAB. The board however claims the spilled blood of the victims who died within the camp?s confines is a monument and sanctuary in itself. An earlier proposal for a monument by one of the Holocaust survivors Jozef Szajna was also rejected by the museum and by the board. It is now being constructed on the other side of the Sola River. The grounds and the boundaries of the concentration camp are protected by the museum. Any external proposals or ideas for projects for the commemoration of the victims of the Holocaust have a greater chance of success outside its boundaries.