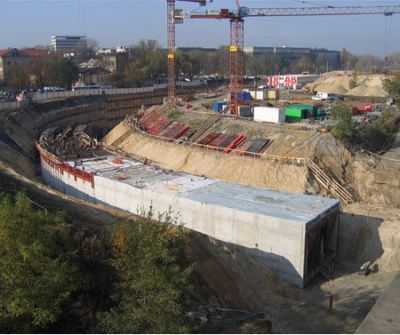 Krakow’s future underground trams will run from Krowodrza Gorka to the tram terminal on ul. Krzemienna, and from the Mogilskie roundabout to the Grzegorzeckie roundabout. Their connection times will be faster than the city’s current surface trams.Now, according to Gazeta Wyborcza, “the city authorities have finally managed to collect money for finishing a tunnel between Mogilskie roundabout and Pawia street and to sign a contract for it with a consortium consisting of Budostal 5 and ZUE SA. “For 164 mln zloty, these two companies are going to install tracks and electric traction in the tunnel, provide it with additional emergency exits and, what is especially important, finish building two underground transfer points ? one of them located under Galeria Krakowska and the other opposite the buildings of the University of Technology at Pawia Street. This is exactly what needs to be done in order to complete the first line of Krakow’s fast-tram.” The tunnel should be ready for its first test ride along sections of the designated route by November 2008. The trams will likely be open for public use in November. Building a fast-tram line in Krakow is an important investment for the city and its goal of developing an integrated system of traffic control. Heavy city-center traffic, the increasing number of students and fast-developing university campuses are all major reasons for improving the city’s transportation system. The prediction by Karol Musial, Jagiellonian University’s pro-vice chancellor, that students would be competing with residents for vacant seats in buses has become a reality. If the present situation persists, in a few years time the academic centers being built in Krakow’s suburbs may be almost inaccessible by public transport. According to the Jagiellonian University’s estimates, the city would have to provide a tram at least every five minutes to make the public transport system efficient. So the fast-tram line investment could be just the first drop in the traffic bucket. The Krakow Municipality’s goals may include constructing new bike lanes, opening city bike rentals, giving priority to public transport, prohibiting traffic in the city center and promoting carpooling.