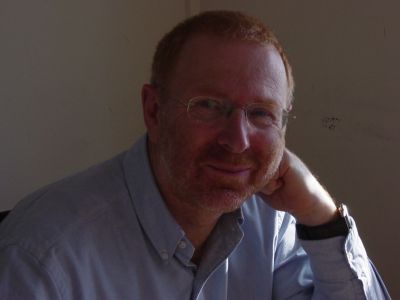 Chris Schwarz, founder of Kazimierz’s Galicia Museum, was buried in Rakowice Cemetery at 13:00 on Friday, August 3, after struggling with cancer for a number of years. Schwarz’s story has something of the fairy-tale about it.  He first came to Poland in 1989 as a freelance photo-journalist to cover the climactic events occurring in that year.  He was taken on a side trip to see some abandoned Galician synagogues afterwards, and took the first photographs of a collection that was to occupy the rest of his life. Upon learning of his cancer some years ago, Schwarz embarked on a project to leave his mark: to establish a museum for his collected photographs somewhere in the Galicia region.  In April 2004, he opened the current building on ul. Dajwor 18 in the Kazimierz district.Kate Craddy, the museum coordinator and a close friend of Schwarz’s, will be taking over the direction of the museum with his passing.  She stresses that the airy, modern construction of the museum was a conscious attempt to make Jewish visitors from Israel and the U.S. feel at home, to offer an alternative to the candles-and-antiques 1930s’ ambiance of Kazimierz’s famous coffee houses.  And indeed, the building functions as a reception place for a great many Jewish families coming to Auschwitz and needing a place to give voice to their experiences.Craddy speaks of Chris Schwarz as a man of contradictions.  Half-Jewish by birth, British by nationality, Buddhist by temperament.  She recalls most prominently his generosity of spirit, and his enormous devotion to his life?s work, the museum.  The museum was closed only one day a year, on Yom Kippur, and on Christmas Day Schwarz would sit in the museum alone to wait for guests.  He sat near the entrance and greeted each of his museum’s guests personally.  Craddy was unable to comment on what direction the museum might take in the future, though she did comment that Schwarz’s photographs would, of course, continue to be the cornerstone of the exhibition.