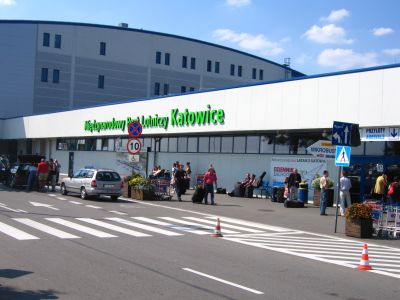 A new terminal at Katowice-Pyrzowice Airport has been open only six weeks, but airport officials are already taking about adding another one. The reason is a spurt in flights to and from Katowice, part of a boom at every regional airport in Poland.

Airport officials expect the growth to continue, necessitating additional facilities. The new Katowice-Pyrzowice terminal, which cost 80 mln złoty, tripled the size of the old one to 21,300 square meters. That makes the airport complex the biggest among Poland’s regional airports. The new terminal is part of the airport building, but the one that airport officials are planning will stand by itself.

The new terminal has three levels. On the first level are the Arrival and Departure areas and check-in desks. The second level contains a restaurant, a book shop, a florist, a pharmacy and other shops.The third level is a passenger waiting lounge. It boasts an observation deck of 180 meters, the longest in Poland.

Katowice-Pyrzowice Airport is the fastest-growing in Europe. A few years ago it served only 200,000 passengers a year. Last year the number topped 1 mln. It is used not only by residents of Katowice, but also Chorzów, Zabrze and the whole region. The new terminal gives the airport the ability to handle 3.5 mln passengers a year, about 1,200 an hour.

But airport manager Kazimierz Kubik said the number of passengers will exceed the new capacity in a few years. That’s why airport officials have been working on a long-term growth plan. Although the final version won’t be ready until the end of the year, airport officials say it will include another terminal, but this time one that will be erected in a new place.

In addition to being able to accommodate a growing number of passengers, Katowice-Pyrzowice opened the new terminal to comply with a EU passenger-screening requirement. When Poland became part of the EU, it became a party to the Schengen Treaty, which covers airport security and other procedures. A major requirement of the treaty is that airports be able to separate passengers traveling to countries in the Schengen Zone (mostly EU countries) from those traveling to other countries. The new terminal offers that passenger-separating ability.

The other Schengen Treaty countries besides EU members are Norway and Iceland.