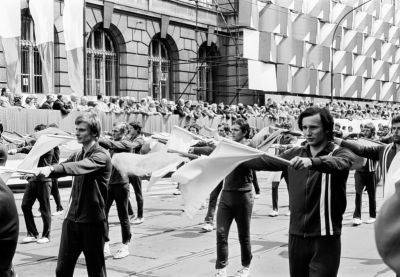 During Poland’s 44-year Communist era, First of May (also known in other count as May Day) was one of the most important ? but far from beloved ? holidays. Mass marches and demonstrations were organized and people were forced to participate in them. First of May was officially declared a Socialist holiday in Poland in 1950 to celebrate “achievements and victories of the workers’ class ? the leading power of the nation building socialism.” Holiday marchers were often bused to the parade sites and organized into various social groups such as “youth,” “workers,” “intellectual workers,” etc. They waved to Communist Party leaders who were standing stiffly on a reviewing platform. In response, the party leaders would wave sluggishly to the marchers, sometimes throwing flowers to the crowd. Parade banners bore slogans: “Greetings for our brotherhood nation of China!” (1968), “Youth! Socialism is your future!” (1960) and “COMECON ? the power of economic progress!” (1980). In addition to banners, organizers often prepared political chants such as: “Long live the Soviet Union ? invincible mainstay of world peace and socialism!”, “USA ? stay away from Vietnam!”, “We condemn Israel ? the vanguard of Near East imperialism!” Marchers carried red and white-and-red flags. The 1950s marches also included dolls representing ?hated? Polish and foreign politicians (Truman, Churchill, Tito, etc.). After a 1956 political liberalization, the dolls disappeared and were replaced by more neutral symbols ? flowers (carnations and tulips) and balloons. The situation changed dramatically in the 1980s after the creation of Solidarity and other opposition organizations. First of May became an occasion for dissent. “It is our holiday!” a 1985 Solidarity brochure said. Leszek Jaranowski of Krakow, now 49 years old, was a prominent opposition activist. He was a publisher and printer of one of the biggest underground newspapers, called Hutnik, which appeared in 1982. “In our little, but important magazine,” Jaranowski said, “we put some notes during First of May which tried to convince our readers not to participate in the absurd official demonstrations. Some Holy Masses were said on that day. I personally never cared for the infamous holiday and it means nothing to me. The only one of importance is Third of May (commemorating the 1791 declaration of Poland?s Constitution).? The First of May holiday, or International Workers’ Day, was actually created in 1889, during a labor congress in France. The main demand was, “8 hours of work, 8 hours of rest, 8 hours of sleep.” As Slawomir Sierakowski wrote for Dziennik in 2006, those slogans are still alive in today’s Poland. And although participation in the Polish Communists’ First of May activities would have made life easier for publisher Jaranowski and his friends, they decided to go their own way. As Solidarity leader Lech Walesa said in 1981: “We should all go fishing on the First of May!” There was a penalty to be paid for ignoring the official marches: ruined career opportunities in Communist Poland. ?I could not even finish my studies, being involved with the opposition,” Jaranowski said. “I stopped after two years and never finished. The resistance was my whole life.” His magazine Hutnik was geared towards workers at Krakow’s gigantic Huta im. Lenina (“Huta in the name of Lenin”), one of the biggest steel factories in Poland. It employed 45,000 people in the 1980s, all potential readers of the underground magazine. (The steelworks factory is now called Huta Sendzimira and is a part of Mittal Steel Poland.) A Solidarity announcement in 1982, when the workers’ union was officially banned and forced to stay underground, proclaimed: “The First of May is a holiday of workers and freedom of labor unions. We therefore reject taking part in any of the demonstrations organized by our exploiters who rule despite our disapproval! We organize our own manifestation. Let us all come with Solidarity?s signs and demonstrate our rejection peacefully.” During the 1980s, the First of May Communist demonstrations became more confrontational. Fights with militia squads occurred regularly. Participants in the official demonstrations were required to sign an attendance sheet before they could go home. Meanwhile, thousands of people gathered for independent demonstrations. Hundreds of officers tried to stop them, beating and arresting even non-demonstrators. Since 1989 and the end of Communist rule, First of May activities have become very different. Opposition members who moved into politics no longer feel that the day is their holiday. Members of the right-wing leading party, the nationalist PiS (Law and Justice), even proposed eliminating the First of May from the list of official holidays in Poland. (Most Law and Justice politicians are Solidarity members and onetime opposition activists.) As for the left wing, opposition groups still organize First of May rallies. But they are staged separately, are relatively small and unnoticed by much of the public. Unlike elsewhere in the world, where May Day retains some popularity, the only real associations with First of May among most Poles today the memories of the past. As Lech Walesa said: “We should all go fishing!”