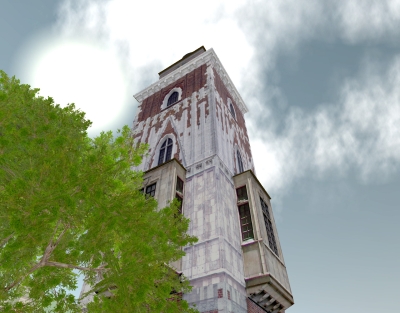 Krakow has become Poland’s first virtual city in the popular online game Second Life, where players can create a character who travels, works, bargains and even eats in virtual restaurants.To start with, the city’s representation – known as Second Krakow – will be limited to Rynek Glowny and adjoining streets. Later it will be expanded to other areas.All the elements of the architecture and infrastructure are faithful copies of the original. There’s Rynek Glowny with Mariacki Church, the Town Hall’s tower, Sukiennice (Cloth Hall), Adam Mickiewicz’s Monument and the facades of apartment houses.Even Rynek Glowny’s money box is there – a one-meter-tall glass box where visitors can donate money to the renovation of the Old Town.Zbigniew Woznowski of the Supremum Group advertising agency came up with Second Krakow.Second Life allows virtual representations of cities around the world to become part of its web site.  “Krakow is a special city and we want to promote it through Second Life,” said  Woznowski, whose name in the game is Zbysioo Borchowski. “I am happy that after a lot of hard work, we finally created Second Krakow. I think it’s the best-quality Second City in the whole of Second Life.”Krakow is one of the first Second Life cities in Europe. Others include Paris, Amsterdam and Berlin.The Supremum Group plans to add the Polish cities of Zakopane and Giewont in October and Warsaw, Wroclaw, Gdansk, Poznan and Katowice later.”We want to build a stronger representation of our nation in the virtual world as well as encourage foreigners to visit Krakow and Poland,” Woznowski said.So far, visitors to virtual Krakow can only walk through the market, go inside empty buildings and buy the city?s famous pretzels, or “obwarzanek,” with a made-up currency known as a Linden dollar. The exchange rate for the Linden dollar is $1 per 270 Linden dollars.Polish Second Life players have been exchanging their views about Second Krakow on the Internet.Most opinions have been positive but many have complained that Second Krakow still has too few activities for Second Life players.Most of those posting comments say that visually the city has been really well done. But more detail ? such as interiors ? needs to be added, they said.Second Krakow visitors also say they hope to find more attractions and activities soon. Woznowski said that will happen. In fact, the Second Krakow team is continually developing and improving the site.”Soon we will be able to ride a hackney carriage, go shopping in Sukiennice, establish our own business and buy real estate,” Woznowski said.A flat on Rynek Glowny will cost a few hundred zloty a month. The price of a stand in Sukiennice has yet to be set.Also in the future, Second Krakow players will be able to visit museums and go to the theater or a movie or drink a beer in one of the garden pubs around Rynek Glowny.Second Krakow’s creators emphasize its educational and informational value. Indeed, every famous spot on Rynek Glowny is equipped with an online sign that tells a bit about it.But the virtual city will be a way to make money, too. For example, the creators plan to give virtual visitors a chance to drink beer in one of the garden pubs around Rynek Glowny. It’s not surprising then that “we are presently conducting talks with Polish breweries that would like to invest in the virtual world,”  Woznowski said. Virtual visitors will also have a chance to see places which normally are inaccessible to tourists. One is likely to be the basement under Rynek Glowny, which archaeologists dug out during the platform’s renovation.”Most probably we will be able to see Rynek Glowny’s underground virtually long before it is made accessible to the public in reality,” Woznowski said.Woznowski is also talking with the city about using Second Krakow as a promotional vehicle. Two ideas are to create tourist-information stands in the virtual city and having Second Krakow link to the city’s web site. In addition, “we want all the events that will be taking place on Rynek Glowny in reality to be transmitted live into the virtual Second Krakow,” said city spokesman Marcin Helbin.  “Second Life is a kind of a bridge between a virtual world and reality,” he said. “I believe that virtual visiting of Second Krakow will encourage game users to come here in reality.”Will the city administration have a virtual representative? “We don’t count it out but so far our representative will be the city information guide,” Helbin said.Although Second Life has more than 8 mln users worldwide and more than 20,000 in Poland, it’s just the beginning of virtual cities, Woznowski said. “Second Life has great potential,” he said, because it incorporates a number of  popular Internet features – such as chat, online games and identity change.”  He said he thinks that in the future “for many people Second Life will be their primary source of information about what is happening in the world.”Second Life has at least one drawback in some people’s minds. Because it is a reflection of reality, it can feature all kinds of human activity in a city, including sex. It is often reported that about 30 percent of the virtual commercial activity in Second Life is sexual. How much sex will there be in the virtual representation of Krakow, which in reality has become a popular stag party spot? Woznowski said the virtual city will have less hanky-panky than the reality. To insure law and order and propriety, Second Krakow will have a city police force.”The negative aspects of the virtual world must be controlled in a way similar to the way they are controlled in reality,” Helbin said. However, around the real Krakow there will be eight “islands” where people will be able to run any kind of business, including casinos and strip clubs.