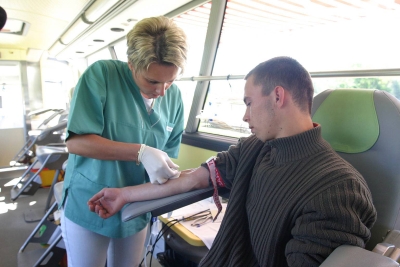 Vacationers are making use of the hot and sunny weather, spending the summer on the seacoast or in the country. Unfortunately, this leaves the cities void of life. Especially the blood bank, which has been left with insufficient amounts of blood for their patients. The demand is high and many potential donors have left the cities for the holiday.About 70 percent of donors are between 18 and 30 years old. Many people in this age group have left Poland to work abroad for the summer or longer.Newspaper headlines report delays of serious surgeries due to a lack of indispensable blood. Even the most common blood types, A positive and O positive, are running low while the most rare, O negative, is used only to save lives and for pregnant women.Last week, Dr. Janusz Skalski, chief of the Cardiology Ward at the Children’s Hospital in Krakow-Prokocim, donated half a liter of blood and then spent six hours performing heart surgery on three-week-old Bartek.The baby feels fine, but the blood reserves aren’t growing. Dr. Skalski describes the situation as “tragic.” During the year, more than 50 donors visit the Krakow Regional Blood Donation Center on ul. Rzeznicza every day. In the summer, there are no more than 30 donors. The same is true in other regions of Poland.Statistics say that a liter of blood is in demand every minute in Poland (1,500 liters per day.) At most, half of the needed supply is accumulated in blood banks in the country?s larger cities. Major car accidents push the hospital staff to their limits.Hospitals are having to call tens of medical institutions before they can find several units of a specific blood group. According to the Warsaw Institute of Hematology, an institution that coordinates blood banks across Poland, blood donor numbers rose from 499,000 to 525,000 in 2006. They donated about 450,000 liters of the life-giving liquid.The country?s demand for blood increases by 8.5 percent each year. More than 1.5 mln transfusions were made last year. The shortage of blood was partially caused by a major slump in donors at the end of the 1980s. Many privileges for donors (such as free vitamins, public transportation tickets and tax concessions) have been liquidated. Many private companies aren?t willing to give employees a free, fully paid vacation day for blood donation. According to the Polish Red Cross, an institution organizing blood donation since 1935, average donations per 1,000 inhabitants in Poland are 25, while in the West the average is between 40 and 60. Many of these counties subsidize blood donations. Actions are being taken to tackle the disproportion between bloods donated versus its heavy demand. This summer, posters in Poland?s major cities are promoting donation with the motto, “Be a Superhero, Donate Blood!” with pictures of ordinary people as heroes saving lives.The main problem is the lack of sufficient donors to maintain adequate blood reserves. The infrastructure already meets the average level  in the EU, or may even  be slightly higher.In Poland, blood can be donated at 300 points. Mobile donation centers also tour the country, especially during the summer. Many non-governmental organizations such as trade unions, scouts and student unions cooperate with the PRC and blood banks. Though donors aren?t paid for their blood, the process still generates costs. As Renata Kawka from the Polish Red Cross says, one liter of blood (two basic donation units), costs 30 zloty in marketing and the financial assistance from the Ministry of Health is still not enough.One encouragement for blood donation may be a change in the tax law introduced in February. Donors will be able to subtract 130 zloty from their income tax for each basic donation. While it’s not much, if combined with awareness, the move may coax many more to help.