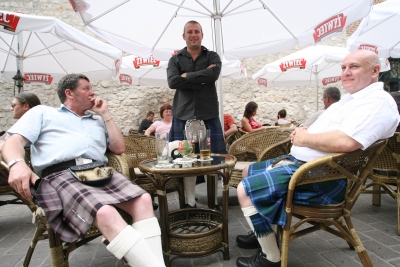 The Krakow City Council has begun cracking down on drunk, rowdy tourists ? and plans to publish flyers in English that warn them of behavior that will not be tolerated. The flyers will also offer tourist information plus tips on avoiding becoming victims of those who prey on visitors. The crackdown follows many complaints from Krakow residents about rowdy tourists, especially from Britain.Part of the crackdown will involve Krakow police and border guardsmen ? Straz Graniczna ? patrolling the city center and the railway station every Friday and Saturday evening. The officers are trying both to curb rowdy tourists and prevent them from getting into situations where their safety or property is jeopardized. The law enforcement officers are using a special map on their patrols that shows them where drunken tourists have been especially troublesome.”We will punish people for littering, breaking the night-loudness ordinance or immoral behavior,” a police spokesman said.The flyers will be available in hotels, tourist information points and probably at Balice International Airport, Gazeta Wyborcza reported.Some pubs in the city center have already begun posting signs saying “no stag parties.” The idea is to try to prevent groups of young foreign men from “hanging out” at a tavern all night, getting drunk and unruly.  Krakow has become a magnet for this kind of hell-raising. Dozens of web sites advertise the city as a place for wild stag parties.The content of the flyer has already been created. It needs only to be approved and translated into English, Gazeta Wyborcza said. In addition to warning tourists about drunkenness, the flyer will contain such helpful information as the phone numbers of consulates, places to obtain medical care plus information about pickpockets and others who prey on tourists. The flyer warns visitors to be especially careful in trams, a favorite haunt of  pickpockets. The flyer also informs visitors not to drink in public places such as streets and parks. And it mentions that Polish law prohibits the sale of alcohol to people who are already drunk, whether they are in a pub, liquor store or other establishment. The flyers also warn that Polish law prohibits loud behavior after 22:00 so people can sleep.And the flyer points out that a violation of these statutes can mean a fine of up to 500 zloty. The crackdown is inspired by the Zero Tolerance program that Rudy Guliani instituted when he was mayor of New York City. During the first weekend of Krakow?s crackdown, police made 24 arrests. Seven received fines that totaled 650 zloty. At one point the City of Krakow was planning to prepare a separate flyer just for British tourists, who have caused the most trouble. The British Consulate decided to assume that responsibility.The city was glad the consulate stepped in because it didn?t want to single out visitors from one country, said Izabela Helbin, head of the city’s marketing and promotion office. The city didn’t want “to make the problem bigger than it really is,” she said. “Eight million tourists visit Krakow every year. Only a small percentage” cause problems.City spokesman Filip Szatanik said city officials want visitors “to have a good time.” The flyers were deemed a way of informing tourists that ?Krakow is a historic city and it is necessary to stand on one’s dignity and respect certain principles,” he said.