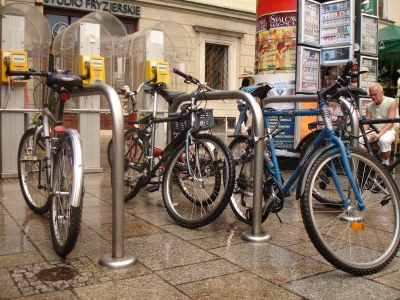 Riding a bike in Krakow is a bit like playing an extreme sport ? except when riding along a bicycle path. But bicycle paths are few and far between in Krakow, which is why it’s difficult to call the city bike-friendly.  The number of cyclists in Krakow is growing with each year. But most cyclists concur that riding on the streets can be very dangerous. “Car drivers ignore us. They just don?t see us,” says Michal, a 25-year-old cyclist from Krakow. ?I?ve been riding a bike in Krakow for over four years. A cyclist needs to be at least twice as careful as a car driver,? he adds.Today, there are a dozen or so bicycle paths in Krakow, and several junctions that join the paths together. City authorities plan to create more, long bike paths leading to the districts situated further from the center. So far, Krakow has bike paths that make it easy for cyclists to reach the Krowodrza, Nowa Huta, Kurdwanow and Ruczaj districts. There is also a beautiful path along the Vistula River that starts in Niepolomice and ends in Tyniec. Of course recreational paths are a great. But what if we decide to treat a bike as a regular means of transport, instead of driving a car? In Western European cities, bicycle paths are laid to decrease the number of accidents and are generally situated on streets where cars are allowed to drive over 30 kilometers per hour. In Krakow, though, most bike paths were created for leisure rides, which makes it impossible to get to most places by using the paths alone, especially in the city center. Cyclists in Krakow are forced to ride on the sidewalks and narrow, overcrowded streets. When riding their bikes on the streets, cyclists need to consider the danger on approaching vehicles. Drivers seldom notice cyclists and tram rails are a serious threat to bikes with narrow wheels. Traffic jams are also a big problem. And when riding bikes on overcrowded sidewalks, many pedestrians respond with hostility. Despite the inconvenience, some cyclists feel comfortable riding their bikes in the city. ?Apart from the city center, where streets are narrow, Krakow is a bike-friendly city,” says Anna Dabrowska, who rides a bike with her 2-year-old daughter in the back seat. ?I think that the real problem is the lack of special stands where bikes can be parked.” Indeed, special bike racks are a rare view in the center, not to mention in the suburbs. This is the main reason why so many bikes are left locked to a tree or a pole. ?If there are no stands, I have to look for an alternative,” says Michal while tying his bike to a fence outside of a pub on Rynek Glowny. The lack of bike-racks is also why so many bicycles are stolen. During the biking season at least one person per week reports a bike theft to police in Krakow.Despite the shortcomings, every year more and more cyclists are on the streets of Krakow. Bike rental companies also aren?t complaining. ?Most of our clients are foreigners,? says a worker at the Rent-A-Bike store on ul. sw. Anny. When asked about which paths he recommends to clients, he replied: ?The most popular route is the path along the Vistula River to Tyniec. We also recommend the area around Kopiec Kosciuszki.”Foreigners have mixed opinions about riding bikes in Krakow compared to their home cities. ?It?s fun, although dangerous when you ride in streets together with cars,” say former Erasmus students who rented bikes and went to Zakrzowek Lake. ?Also, the bikes weren?t very good,” they added, although conceding that riding a bike in Krakow is a good alternative to public transport.