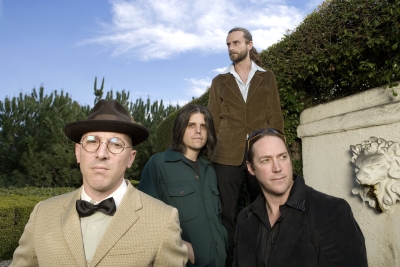 his year’s Katowice Metal Hammer Festival in Spodek Hall promises a feast for heavy metal fans, bringing together artists from all around the world and a range of genres. The festival will take place on Sunday, August 12, and features performances by Tool, Chris Cornell, Dir En Grey, and Polish groups Coma and Delight.For Tool, the main star of the festival, this will be their fourth visit to Poland since their first performance in 2001. The band, led by charismatic vocalist Maynard James Keenan nicknamed “King Crimson of the 21st Century,? has proven that its concerts are the best acts in metal-rock. Despite the complexity and technical difficulty of their pieces they transmit unbelievable amounts of energy and emotion to the crowd, making their shows an unforgettable experience. That being said, their most recent “10,000 Days” album release tour (2006) in Poland induced conflicting opinions among spectators. Although more or less everyone agreed that technically the sound and light show was perfect, with scenes from Tool’s music videos playing on large screens, some argued that the concert lacked inventiveness and was simply too short, lasting about 1.5 hours. This year?s U.S. tour, however, showed that the band is in great shape. The concerts seem to include many more improvised and unexpected elements. As a first-time visitor to Poland, Chris Cornell is facing the overwhelming difficulty of pleasing everybody. Active since forming the grunge group Soundgarden in 1984, the artist has a lot of catching-up to do with the Polish audience. The rigid time discipline imposed by the one-day festival schedule seems a vicious foe. The artist doesn?t seem at all discouraged by this; his playlist includes songs of his famous ex-groups, Soundgarden and Audioslave, his two solo albums ? including last May?s release “Carry On? featuring “You Know My Name” (the theme song from the latest James Bond movie “Casino Royale”) ? and songs by the somewhat forgotten band Temple of the Dog. This was a single-record release in 1991 between Cornell and musicians who later created Pearl Jam. The collaboration commemorates the death of their friend Andrew Wood, the vocalist for Mother Love Bone. The Japanese band Dir En Grey came to Europe in 2005 after a successful eight- year career in Japan. Now associated with the metal genre, the group has evolved through punk rock, pop and progressive rock, finally combining them into a truly exotic fusion. Earlier this year the group has completed their first U.S. headlining tour after earlier performing alongside Korn. They were supported by Texas-born alternative rock band, Fair to Midland (discovered by Serj Tankian of System of a Down), during the Metal Hammer Festival. The international lineup is completed by experimental American hardcore band, Bury Your Dead. Poland will be represented by only two groups ? Coma and Delight. However, the lacking quantity is made up for by the quality as both are the cream of the crop when it comes to grunge Polish music. Coma is probably the most important young alternative rock band in the country. Both of its albums, the 2004 “Pierwsze wyjscie z mroku” (“First Exit from Dusk”) and the 2006 “Zaprzepaszczone sily wielkiej armii swietych znakow” (“Forgiven Strengths of Great Holy Signs? Army”) have received acclaim from fans as well as the industry, which granted both the Fryderyk award. The band Delight started out in 1997 in the small town of Skawina (near Krakow). The group’s career has recently shifted into high gear after winning the competition for Best Unsigned Gothic Art International during the Wave Gothic Treffen Festival in Leipzig in 2005. The band signed a contract with Roadrunner Records, one of the most important U.S. labels, which allowed Delight to publish a world-class record Braking Ground in 2007. Gates to Katowice?s Spodek Hall open at 15:00 and the Festival will begin at 16:00.Tickets to the event, costing 145-400 zloty are available via www.metalopolis.pl, www.ticketonline.pl, or www.eventim.pl and in selected stores around Krakow.Katowice is about 1.5 hours from Krakow by train and even less by car. Spodek Hall is a 15-minute walk from the train station or can also be reached using tramlines 11 and 13.