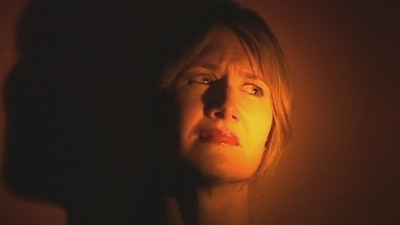 A dozen or so films and a cult television series into his career, and David Lynch’s ongoing quest for the weird ? a cosmos made up of magical dwarves, circus freaks, severed ears and tractors ? has taken him to Lodz, Poland. In “Inland Empire,” a monster of a film clocking in at just under three hours, a Polish accent signifies an unstable, chaotic element in the otherwise hyper-structured landscape of Hollywood, a Polish folk tale may or may not place a curse on a pair of movie stars, and Lodz, home of Poland’s most important film school and cradle of such luminaries as Roman Polanski and Krzysztof Kieslowski, stars as the anti-Hollywood, a dark industrial landscape where fairy-tale horse-drawn carriages trot down streets sparkling with snowflakes. As in “Mulholland Drive,” Lynch’s strategy here is to set up some narrative expectations in the first hour of the film, and then dash them to pieces in the remaining two hours as the storyline becomes a scattered and erratic thing that operates more through suggestion and association than linear story-telling. But in ?Inland Empire? this fragmentation goes on for so long that even the most narrative-bound viewers must eventually give in and start watching in a different way, a way that bears more similarity to watching video art than conventional cinema.The storyline, in brief, goes as follows. Our heroine Nikki (Laura Dern) lives in an extravagant manor, and is one day visited by a new neighbor with a Polish accent, who tells her that she will get a starring role in a new film, and insinuates a brutal murder. Nikki does indeed get the part, in a romance based on a cursed Polish legend, whose previous Hollywood adaptation concluded with the mysterious deaths of the two romantic leads. Nikki’s jealous husband, also a Pole, might be homicidal, but in spite of this danger the two romantic leads begin carrying their amorous activities off-screen.As a plot-line this all sounds quite conventional, and in the first hour Lynch plays some fairly standard film-within-a-film tricks. But much of what happens in the first hour is also much more subtle. For instance: when Nikki is visited by her lunatic Polish neighbor, a woman who lives in a “brick house that cannot be seen from the road” (shades of fairy-tale), the neighbor’s rant slides from awkward pleasantries to macabre prophecy to crackpot philosophy on the nature of time (?today might just be tomorrow?), concluding with the statement: “For example, tomorrow you will be sitting on that couch…? Then the very next second the woman is gone and Nikki is in fact sitting on the couch. And here the viewer makes a choice ? has (a) the film jumped forward in time, has (b) the film become the crazy woman?s prophecy, or has (c) today in fact become tomorrow? The viewer either makes a decision, or tries to juggle these possibilities, this paradox, through the watching of the film. But it is not so easy to think a paradox, and as the paradoxes multiply and pile up, the viewer must eventually give up and submit to a general disorientation. This is intensified, as I have said, in the latter half of the film, where instead of narrative continuity we have repetition of images (a red lamp, a monkey, men in rabbit suits, a screwdriver) and irrational character development (Nikki begins as a sophisticate in a manor, later lives in a middle-class home, and by the end curses like a sailor, has a face covered in bruises, and coughs up blood in a back alleyway in the company of homeless people). The effect of this is to make the material reality of this world a paper-thin layer, and to emphasize the fact that this is a film reality which can shift about as it pleases, without bothering its head too much about continuity and natural laws. A certain segment of Inland Empire’s viewers will no doubt miss the presence of a “this-happened-then-this-happened-then…” narrative, and for them Lynch tosses in occasional reminders of the original storyline, to create the impression that this delirious tale is somehow anchored. But when the camera is shown pulling away from Nikki in the last ten minutes of the film, indicating that what we have been watching is again a film-within-a-film, this resolves nothing. By then it is clear that there is nothing to be gained from sorting out “film reality” from “film-within-film reality,” and that the point of this Hollywood/Lodz tale is that film and reality are an indivisible experience.