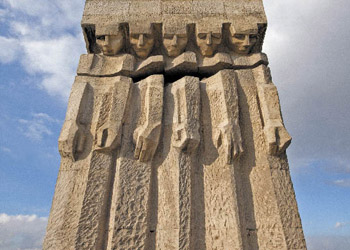 “Every prisoner had to count each stroke loudly. If a mistake was made in the count by him, the beating started afresh from number one. We were not beaten by one person, they were taking turns, as one man would tire very quickly, having to hit someone 100 times with his full strength. The whip would be passed to another SS man there. It was impossible being hit so many times, to count properly, people were making mistakes, and the beatings were starting afresh.” Testimony of former Płaszów prisoner Henryk Bloch, at the trial of Płaszów camp commandant Amon Göth in 1946.

It is difficult to associate the words of Mr Bloch with the slightly forlorn scrap of land just south of the centre of Krakow that was once the site of the Krakow-Płaszów concentration camp. Beyond memory and memorials, there is little there to suggest that the atrocities described by Mr Bloch in his testimony – and many much worse – were daily occurrences here.

But, every year, as spring comes to Małopolska, a march is held in memory of those who suffered and perished at the camp, and of the inhabitants of the nearby ghetto in which Krakow’s Jews were imprisoned, beaten and murdered. The march begins at Plac Bohaterów Getta and follows a path through a grey landscape to the site of the former concentration camp. It is held at this time of year because it was in March 1943 that the ghetto was finally liquidated, and the remaining inhabitants moved on to Płaszów, Auschwitz and other camps.

Płaszów itself was to remain operational long after the ghetto had gone. In fact, according to the Holocaust Research Project, it was still working after Göth had been arrested for fraud in the autumn of 1944; and, though the Red Army arrived in Krakow on January 15 1945, just one day before that the last 200 prisoners at the camp had been sent to Auschwitz. When the Russians arrived, the camp had been razed.

Sunday, March 18: Remembrance March on the Anniversary of the Liquidation of the Krakow Ghetto, beginning with speeches at Plac Bohaterów Getta.