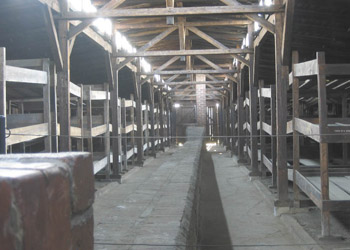 A top-level row has erupted over the fate of a barracks building from the Auschwitz-Birkenau extermination camp currently on loan to the United States Holocaust Memorial Museum.

The wooden building has been at the Washington DC museum for 20 years, but a change in Polish law means that it must now be returned to Poland. The Holocaust Memorial Museum is resisting the request on the grounds that the exhibit is too fragile to be moved.

In 2003 the Polish parliament passed a new law requiring all historical objects on loan abroad to be returned to Poland every five years so that they could be inspected. The aim of the law was to protect Poland’s cultural heritage, much of which was stolen or destroyed during World War II.

The building is in fact just half of one of the very few surviving Auschwitz-Birkenau barracks used to house the camp’s inmates. The other half still stands at Birkenau. It was transported to Washington in 1989 under a 20-year loan agreement, a term that expired three years ago.

Piotr Cywiński, the director of the Auschwitz-Birkenau museum said: “We have indicated many times that this half of the barracks must return, that there is no other solution in accordance with the law.” According to the 2003 law, Cywiński could face two years in jail if he fails to secure the return of an historical artefact.

There is a long history of fruitful co-operation between Poland’s Auschwitz-Birkenau Museum and the US Holocaust Memorial Museum. Since 2003, the US institution has returned thousands of objects to Poland for inspection. These were primarily small items, the personal possessions of Auschwitz-Birkenau victims, and were usually replaced by similar items while they were being inspected.

However, the Holocaust Memorial Museum sees the barracks building as an entirely different case. A statement released to The Associated Press reads: “Due to the barrack’s size and the complexity of its installation, removing and transporting it to Poland presents special difficulties, including potentially damaging the artefact.”

Officials at the US and Polish institutions are currently in talks and the Polish ministries of foreign affairs and culture are also said to be involved.