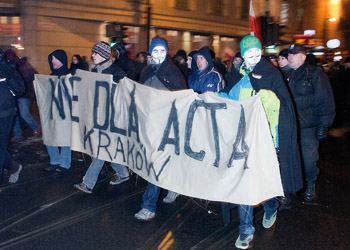 Several thousand people marched through central Krakow in protest against an international treaty that they believe will destroy freedom of information and privacy.

ACTA, the Anti-Counterfeiting Trade Agreement, is designed to prevent illegal copying and sharing of computer software, music and video. It also aims to protect the patent holders of medicines and other goods. ACTA would have an international scope, governed by an independent organisation.

However, protestors believe that ACTA is a tool for censorship and would give authorities new and sweeping powers to limit freedom of speech via the internet. They want the 45-point agreement scrapped, saying it would impose severe and disproportional criminal penalties.

The Polish government’s position was, as the Krakow Post went to press, unclear. January 26 saw some politicians and demonstrators in Warsaw protest against plans to ratify ACTA, and calling for a referendum. And on February 17, Prime Minister Donald Tusk withdrew his support for the agreement. The EU, however, has effectively signed – opening the door for all member states, including Poland, to ratify their willingness to take part.

On February 11 up to 4,000 anti-ACTA protesters marched through the streets of Krakow and rallied on the Rynek Główny.

Flags and banners declared ‘No to ACTA’ and ‘ban censorship,’ while protestors called on the Polish government to refuse outright to take part in the agreement.

In 300 other cities, across Europe, Canada, the USA and Australia, ACTA has also sparked protests. The first political scalp of the campaign was very high profile; French MEP Kadir Arif left the European Parliament in protest, telling the BBC: “I condemn the whole process which led to the signature of this agreement: no consultation of civil society, lack of transparency since the beginning of negotiations, repeated delays of the signature of the text without any explanation given, and rejection of Parliament’s recommendations as given in several resolutions of our assembly.