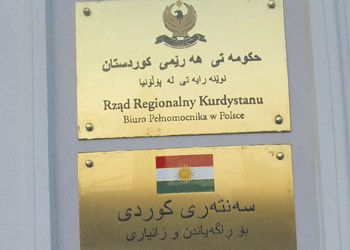 Southern Poland and the fledgling Kurdish state seem like unexpected bed-fellows, so why is the Sejmik (regional parliament) of Małopolska forging diplomatic and trade links with Arbil?

“Despite years of continuous conflict, Kurdistan has been land of plenty for daring oilmen and dexterous building contractors,” says Stanisław, a retired Polish motor mechanic from Nowa Huta who worked in Arbil during the 1980s.

With Kurds scattered across Turkey, Iraq, Syria and Iran, this nation without a state bears some resemblance to Stanisław’s home country more than two centuries ago.

Whatever fellow feeling ordinary Poles may have for Iraqi Kurdistan, the sympathy for the cause of Kurdish independence that was recently expressed by the speaker of the Małopolska Sejmik, Kazimierz Barczyk, has irritated the Polish Ministry of Foreign Affairs.

When Barczyk invited his Kurdish counterpart, Kamil Kirkuki, to address the executive chamber of Lesser Poland, a Foreign Affairs Ministry spokesman managed only the following statement: “We support inter-regional initiatives between the two countries when they are taken with the blessing of the Iraqi government.”

Sharp-eyed visitors to Krakow’s Market Square may have spotted the discreet brass plaque announcing the presence of Kurdistan Regional Government (KRG) representatives in the city. The KRG is largely autonomous from Baghdad and has its own military and flag. It is also able to take low-level diplomatic initiatives abroad, through unofficial chargés d’affaires.

The KRG has offices in many European cities, though they are usually in capitals rather than regional centres. The special place reserved for Kurdistan in the heart of Małopolska perhaps explains the anomaly in the case of Krakow.

Mr Ziyad Raoof is the director of the Kurdish Centre for Information and Documentation (KCIiD) in Krakow, as well as being the KRG’s representative in Poland. He hosts an annual reception for Poles and Kurds to celebrate Newroz, the Kurdish equivalent of New Year’s Eve, which falls on the spring equinox. The guest list is not as short as common sense might suggest – Kurds have been coming to Poland and settling for decades.

In his book The Kurdistan Knot, Professor Leszek Dzięgiel notes that some ethnic Kurds settled in Central Europe in the 1960s. The scholarship programs offered by Soviet-dominated states such as Poland were often a back-up plan for Kurds eager to escape oppression in their own lands but unable to attend Western universities.

Professor Dzięgiel, an eminent Kurdologist at the Jagiellonian University, helped set up a Polish-Kurdish Society in 1992, along with Ziyad Raoof and Ali Ghafour, then the two most senior Kurdish residents in Poland. Ziyad Raoof, still a student at that time, had relocated from Moscow to Krakow six years earlier after visiting some Polish friends for Christmas.

Ziyad Raoof now runs his own businesses in Krakow, one of which is the U Ziyada restaurant, serving Kurdish specialities in the sublime setting of Przegorzały Castle near Krakow.

According to Polish ethnologist Maria Giedz, a second wave of Kurdish students, mostly from Syria, arrived in Poland during the recession of the 1990s. Poland’s economy was a mess at the time, but it was still better than Syria’s, and newly-free Poland was a stepping stone to Western Europe.

In the same decade the plight of the Kurds of Iraq first came to the attention of Europeans watching the Gulf War and its aftermath on their television screens. Westerners became aware for the first time of the horrors of Saddam Hussein’s Al-Anfal genocide campaign, which was carried out against the Kurds during the Iran-Iraq War.

The end of the Gulf War saw the US and UK establish a no-fly zone over Northern Iraq intended to protect the Kurds from Iraqi retribution for their participation in the failed uprising against Saddam.

Despite having a host of its own problems, Poland joined the effort to bring succour to the Kurds. In the spring of 1991, Warsaw sent four trucks loaded with medicines, blankets and food to northern Iraq. Three of the trucks got stuck in Turkey trying to cross the border. The fourth eventually reached Sirnak province, but not before much of its cargo had passed its use-by date.

Since then, relations between Poland and Iraqi Kurdistan have significantly improved. In November 2011, Małopolska representatives signed a Declaration of Co-operation with the KRG in Arbil. And last month a KRG delegation arrived in Poland with the aim of boosting commercial ties.

“Since one of the points in the agreement refers to research co-operation in education, I truly hope that bilateral projects will soon mushroom in the academic field,” said Krzysztof Lalik, a PhD student in Kurdish studies at the Jagiellonian University.

“Since 2004, at least six Kurds have earned doctorates and another five have obtained masters degrees at the Jagiellonian University,” said Ziyad Raoof, who is also particularly proud of the Kurdish language classes organized jointly by the KCIiD and the University.

So what do Poles and Kurds really have in common? “Both of these nations have fought for freedom through the centuries. They also share the same penchant for hospitality and a certain range of topics in literature,” explains Ziyad Raoof.

Meanwhile, the Kurdish cause has found many supporters abroad. “Don’t think too little of them. Within a few decades, Kurds will have a unified state – you’ll see,” exclaims Stanisław as he alights from a tram.

One thought on “Krakow-stan: The Ties between Kurdistan and Małopolska”