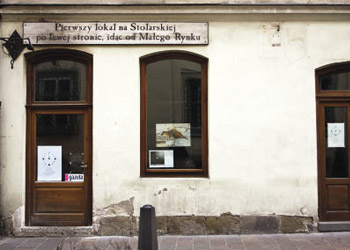 Every month last year the Krakow Post scoured the city for the best beers to be had. Despite our Vulcan-like devotion to duty, it gradually became clear to us that the places in which we were sampling these beers were not all the same. More precisely, some of them were nice to be in while others were grimy pits reeking of mildew.

And so it came to pass that Beer of the Month was reborn as Bar of the Month – a master stroke of re-branding that both preserves our monthly excuse to overindulge and cuts down on printing costs by being one letter shorter.

The rules of Bar of the Month call for the jury to visit and sample all of the drinking establishments on a chosen street on the same day. In the limited drinking time available between Christmas and New Year we subjected ul. Stolarska to our scrutiny. It’s a short street known for its embassies and the inability of its bar owners to resist giving their establishments whimsical names.

Most whimsical of all is Pierwszy lokal na Stolarskiej po lewej stronie idąc od Małego Rynku (The first place on Stolarska on the left going away from the Mały Rynek), a name that teeters on the edge of being cleverly amusing and annoyingly twee. X-Factor winner Gienek Loska was strumming in the smoking room, but that turned out to be okay because he stopped after 20 minutes to snog some bird.

Młoda Nowa Polska is both the most conventionally named and the least comfortable place on the street. The weird internal layout makes you feel like you’re waiting in a corridor and the extraordinarily busy collage covering much of the wall space adds to the feeling of distraction.

I always find Tram Bar disappointing. There’s nothing particularly wrong with it, but the name and its superficial internal resemblance to a tram seem to promise much that is never delivered.

The Irish Mbassy is a masterfully executed Irish theme pub that looks, feels and smells as if it’s been transplanted from a British city centre – Guinness on tap, a comforting background odour of fries and burgers and endless, glossy widescreen sport. It does what it does extremely well, but it wasn’t for us, or our wallets.

The USP of Ambasada Śledzia is that all drinks and snacks cost 4 złoty – apart from the ones that don’t. This is achieved by serving the vilest beer I have ever encountered in very small glasses. You need to be young to make anything of Ambasada Śledzia but, if you are, I imagine it’s the perfect place to get drunk very quickly.

The honour of a second visit and the title Bar of the Month went to Pierwszy lokal, largely because of the Smocza Głowa on tap.

One thought on “Bar of the Month: Pierwszy lokal na Stolarskiej”