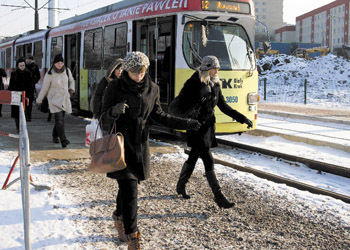 A new tram line into Krakow’s Ruczaj estate has so far proved a disappointment for many passengers, who have seen their journey times to and from the city centre lengthened.

The 1,800-metre line for route 12 opened in late December. It was supposed to take the strain out of travelling by public transport and open up access to one of the fastest growing parts of the city. But passengers who used to be able to get from their homes in Ruczaj to shops and offices in the Old Town in just under half an hour on the bus say that it can now take up to 40 minutes. Many have also complained that the tram used for route 12 is often packed.

Róża Kozina-Laba uses the number 12 regularly to get to work from Ruczaj. She told the Krakow Post that there was also a problem buying tickets for the journey, because there is no kiosk or ticket machine nearby.

Ms Kozina-Laba added: “It’s not as quick as the buses were, and it’s not that convenient to get to the tram stop. I live two stops past the end of the tram stop and have to catch a bus as well, but the timetables are not synchronised.”

But, she said, the roads around Tesco and Kobierzyńska had become better for drivers, with traffic flowing more easily now that the line-building works are finished.

Another Ruczaj resident, who also works in the city centre, agreed that it now took longer to get into work – from around 29 minutes to up to 39 minutes at times. Cuts to bus routes 124, 128 and 424, which now end at Rondo Grunwaldzki, have forced more people onto the trams and caused overcrowding, she said, and there were access problems with the tram stop at the Ruczaj end of the line.

She added “There is no pavement there, so you have to walk through the mud and the stones. I struggle to get there in high heels, so I don’t know how anyone in a wheelchair or with any other kind of disability would manage.”

The tram line was opened on December 29, and the first passengers boarded tram number 12 (Ruczaj to Wieczysta) and 18 (Ruczaj to Cichy Kącik) on the morning of December 30.

When it is finished, the Ruczaj tram route will include around 4km of new tram line, and will have cost around 150 million zł. The entire project is scheduled for completion by the end of this year.