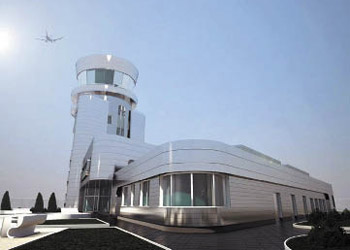 The Polish Air Navigation Services Agency (PANSA) plans to construct a new air traffic control tower and radar system at Krakow’s John Paul II International Airport. The tender was won by Prochem S.A. and will be the company’s second project in co-operation with PANSA.

The tower is intended to improve air traffic safety and to ensure appropriate working conditions for air traffic control staff. The new tower will be about 32 metres tall with the operations room at 26m. Construction will start in spring 2013 and is due to be completed in the fourth quarter of 2014 at a total cost of about 725,000 złoty.

As well as the tower there will be another important investment in the airport’s infrastructure – a new radar system. The project will involve the installation of equipment capable of Mode S operations. Mode S (or Mode Select) is a radically improved system for tracking and communicating with aircraft that is becoming standard in developed nations.

The new radar facility will cost about 25 million złoty and will replace existing equipment that has been in used for the past 15 years. “The construction is primarily meant to help air traffic controllers. When everything works well, passengers don’t actually see the work of controllers – it only becomes apparent when something goes wrong,” said PANSA spokesman Grzegorz Hlebowicz.

The improvements will ensure safer flights, but will not enhance the airport’s ability to operate in bad weather, such as heavy fog. Airport president Jan Pamuła said: “This prestigious investment fits perfectly into the development plan for Krakow Airport.”

Low cost airlines and new routes meant that John Paul II International Airport served 215,430 passengers in November 2011, which is 12 per cent up on the same period last year and the best November in the airport’s history. The total number of passengers passing through the airport in 2011 increased by 4 per cent year-on-year.