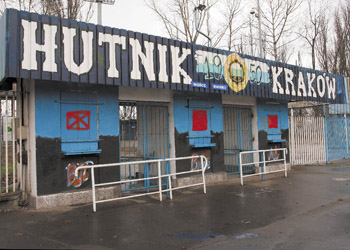 Krakow’s Błonia meadow – between the city’s two football stadiums – will be turned into a fan zone for the duration of the Euro 2012 competition, with space for up to 30,000 spectators to watch matches on a big screen.

Jacek Majchrowski, Mayor of Krakow, told a press conference that the fan zone would enable city residents and visitors to enjoy the tournament in a safe environment. He added that Błonia was an ideal location, as it was central and in easy reach of all parts of the city.

Mr Majchrowski said: “Krakow is already being spoken of as the unofficial fifth city of Euro 2012 in Poland. Although no games will be played here, some of the best football teams will be based here – the English, the Dutch, and certainly the Italians.”

The three big teams that have chosen Krakow as their base for the tournament will bring thousands of fans with them. However, for the England squad at least, there is a question mark over the quality of their training facilities.

England’s players will stay at the luxurious Hotel Stary in the city centre – but their training ground will be the less than glamorous Hutnik stadium in Nowa Huta. The English tabloid newspaper The Sun published a scathing report about current conditions at Hutnik, branding it a “shambolic dump,” with a “muddy, waterlogged pitch and rubble-strewn changing rooms… barely fit for a pub team.”

However, the English Football Association has confirmed that it is paying for a new pitch, and that further renovations to bring the stadium up to scratch before June are being funded jointly by the FA and the city of Krakow.

The report in The Sun prompted a furious response from Magdalena Sroka, Joint Deputy Mayor of Krakow. In an open letter to Dominic Mohan, editor of The Sun, Ms Sroka complained that photos accompanying the report were misleading, and denied that renovation at the stadium was moving ‘sluggishly.’

She wrote: “The renovation of the changing rooms, the façade and the modernisation of the pitch will be completed in May 2012. I do guarantee that all the deadlines, fixed in co-operation with the English FA, will be met. The photographs featured in Nick Parker’s article were, in fact, taken during preparatory dismantlement work conducted at Hutnik’s facilities. They do not picture the building as inspected by England’s manager Fabio Capello on October 31st.”

“I would like to mention that, in addition to the Hutnik stadium, Krakow is ready to put at the disposal of our English guests the neighbouring facilities on ul. Ptaszyckiego, including the Com-Com Zone Sports Centre. The state-of–the art centre occupies an area of six thousand square meters and consists of a swimming pool, a sports hall, three training rooms, a superbly equipped gym and a recreation zone.”

Ms Sroka also wrote that the FA had visited the city and facilities on several occasions, and were happy with the England squad’s base. She said that The Sun’s article was “truly shocking,” and requested a correction be published and that the article be removed from the newspaper’s website.

Many of the readers who commented on the article on the newspaper’s website were uncharacteristically supportive – with several positive comments about the efficiency and hard work of Polish construction workers and more about England already making excuses in anticipation of a poor performance in the tournament.