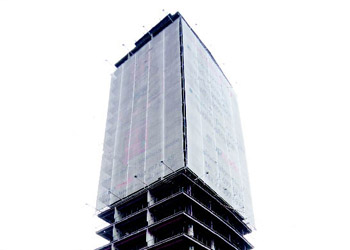 The Szkieletor tower, which has blighted Krakow’s skyline for 30 years, is to remain a crumbling ruin as the latest in a long line of renovation schemes is derailed.

At 92.6m, the infamous 24-storey Szkieletor tower is the tallest building in Krakow – it’s 11m taller than St. Mary’s church in the Market Square. Its architect, Krzysztof Leśnodorski, recalls that the Communist authorities specified the building be as tall as possible.

Work began on the building officially known as the NOT Tower (Naczelna Organizacja Techniczna – Main Technical Organisation) in 1975 and came to a halt in 1979 with the tower little more than a shell. The unfinished building quickly acquired the nickname ‘Szkieletor,’ after the skeletal villain from animated 80s children’s show He-Man and the Masters of the Universe.

Szkieletor was supposed to have a twin, and the two buildings were to act as a gateway to a skyscraper district for Krakow, a so-called ‘Polish Manhattan’ that was to extend toward today’s ul. Beliny-Prazmowskiego and demonstrate the power of the People’s Republic of Poland. The original deadline for the entire project was 2005, but the economic and political crises of the 1980s brought the dream to an end.

Since the 1990s Szkieletor has passed through the hands of a succession of owners, some with the intention of completing and commercialising the building, others looking to demolish it and start again on a prime piece of city-centre real estate. Since 2002 its concrete outline has been enlivened with huge advertising billboards – an innovation that has not endeared it further to Cracovians.

In 2000 there was a concerted effort to solve the Szkieletor problem once and for all, but it wasn’t until 2005 that the TreiMorfa company bought it for 30 million złoty. The following year TreiMorfa announced its intention to refurbish Szkieletor and commissioned German architect Hans Kollhof to do the job. Kollhof’s plan called for increasing the tower’s height to 130 m, but the Head Architect of Małopolska, Jan Janczykowski, objected and the project was put on hold once again.

2010 looked like a breakthrough year when all relevant authorities accepted a plan to turn the abandoned Szkeletor into the money-making TreiMorfa Tower – a 20-storey hotel surrounded by blocks of flats, offices and restaurants with a total rentable area of ca. 70,000 m2.

Architect Marek Dunikowski has returned to the idea of a Krakow Manhattan. His plan features a restaurant with panoramic views and exhibition or performance space on the two top floors. The total cost of the project is estimated at 100 million euro. “What was presented is no doubt within the scope of timeless architectural convention,” said Krakow’s head architect, Prof. Andrzej Wyżykowski.

Phase one was to include dismantling the existing concrete elements in the tower, but inspections showed that the structure is sound enough for further use. “I hope that when the enterprise is completed, Krakow will have a piece of good architecture,” commented Prof. Wyżykowski.

It seemed that the last obstacle had been overcome in August 2010 when the TreiMorfa Tower received planning permission. The hope was that construction would be completed before the Euro 2012 championship, but protests were lodged by the Nature Protection Society of Krakow and the owner of a neighbouring building against the increased height of the tower, among other things.

These objections were dismissed by the Magistrate Appeal Committee, but the protesters then submitted their case to the courts. As a result, planning permission was withdrawn in December of last year due to the discovery of errors made by TreiMorfa in their application and by city officials who issued the permission.

“I am shocked. The limits of absurdity have been exceeded,” said TreiMorfa shareholder Szymon Duda. “I am also crushed. The city has found itself in a difficult situation and we will do everything to correct it,” added Joint Deputy Mayor, Elżbieta Koterba. She also announced an investigation into the errors made.