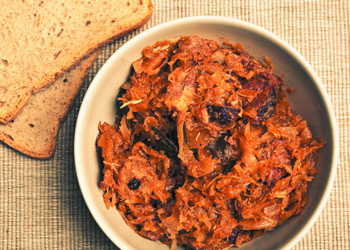 Ah, bigos – that most beloved of Polish dishes, and simultaneously the most hideous looking. Let’s not even mention the questionable stench it emits while bubbling away on the hob. But there’s something about this simple combination of sliced cabbage and hunks of meat, the meeting of sour and savoury, that is absolutely, mouth-wateringly scrumptious.

You’ll need to get up close and personal with your local butcher for this one, and don’t even try going to a supermarket. Plenty of meat is needed for this (sorry, vegetarians), and from as large a variety of animals as possible. Originally, bigos was made with wild game, which you’re more than welcome to include if you’ve got a spare wild boar about. Otherwise, pork, beef, and veal are all good choices, and don’t worry about buying expensive cuts. Cheap cuts, on the bone, work best.

Even though attempting a pot of bigos for Christmas could well make your Polish in-laws positively insane with glee, you certainly shouldn’t worry too much about getting it just right. Bigos is not an exact science – it’s essentially about throwing a bunch of stuff in a pot and letting it boil until it tastes good. Most intriguing of all, however, is that it will taste even better the next day.

How to cook Bigos:

Soak mushrooms until soft. Cut into bite-sized pieces, and save the left over mushroomy water. Slice the head of cabbage finely, throw into your largest pot with the mushroom liquid, and mushrooms, add a few cups of water, and boil until soft. Empty sauerkraut into a colander, squeeze out excess liquid, and rinse through with water. Add to the pot and boil away. Brown the meat, whole and bone-in, in a pan, or if you are feeling lazy, just throw it right it into the pot. Cut bacon and sausage into bite-sized pieces and add to the mix. Add the spices, alcohol, prunes, and tomato paste, mix it all up, cover, and walk away. At some point, when the meat is soft and cooked through, you’ll want to fish it out, remove the bones, cut it into chunks, and return it to the pot. Keep checking on the stew to make sure nothing’s too dry (just add a splash of water), and if it’s too wet, just take the lid off for a while until the sauce reduces. An hour later, your bigos should be just about ready. Leave it for two hours if you feel like bragging about how the stew took you “hours.” It’ll also probably taste better.