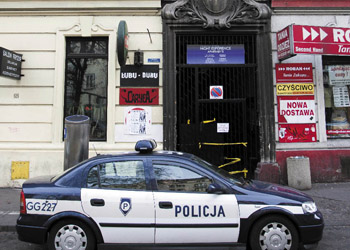 A mass inspection of Krakow’s pubs and clubs is underway, following the collapse of a flight of stairs at a popular night spot that resulted in 29 injuries and 2,000 people being evacuated.

The accident at Wielopole 15, which happened overnight between November 5 and 6, forced the closure of all of the clubs based in the building. The clubs remain closed – but Krakow’s fire department, which worked from 2.30am until 6am to rescue revelers and secure the building, confirmed that hundreds of other venues would now undergo inspections in order to protect public safety.

However, one city centre bar owner told the Krakow Post that the city’s safety and building departments needed to work together proactively to avoid further accidents and enforce existing laws. He said a lot of venues – particularly those underground – were potential death traps. Many lacked basic safety measures such as fire extinguishers and emergency lighting, emergency exits were limited to one main door that would become bottlenecked in a panic situation, and bar staff were often untrained in responding to an emergency.

He said: “There will be a lot of people in Krakow during next year’s football tournament. If something happens then, you can forget about tourism in the city.

“It’s not possible to do everything because of conservation orders on buildings, and these bars are part of the city. I hope another accident does not happen, but just basic things like emergency lighting would make these places a lot safer. It’s better to be safe than sorry.”

One eye-witness to the Wielopole accident – Polish student Wojtek – described the initial reaction to the accident as surreal. He added that the high volume of music from the clubs prevented mass panic, saying: “Most of the people were unaware of what happened in the stairwell. The disc jockeys continued for some time to play their music.”

Initial fire service reports suggested that the stairs collapsed due to structural problems – later specified as problems caused by renovation work. And it has since emerged that the city office responsible for building safety has been concerned about the safety of the building since at least 2007. Aleksander Rączka, son of Wielopole 15 owner Jan Rączka, told the newspaper Gazeta Krakowska that his father was currently appealing a city ruling connected to the permitted uses of the building.

He added: “We are very sorry for what happened in our building. However, from our side all the mandatory inspections of the building were made. These showed that the condition of the building was good and that there were no structural defects.”

Mr Rączka said that, if there had been any renovations to the staircase, they had been carried out without the knowledge or consent of his father, and that the clubs based in the building had responsibility to maintain the stairs. A spokesman for one of the clubs, Caryca, disagreed, telling Gazeta Krakowska: “Our club has signed an agreement that clearly defines the area of the premises, to its threshold. It contains no single word concerning obligations regarding the other parts of the building.”

A spokeswoman for the city prosecutor’s office told the Krakow Post that residents living near the club complex had made official complaints about activity at the building – with one coming just ‘a few weeks’ before the accident. Barbara Sołtys, representing the Wielopole neighbourhood association, said the residents had recently sent a letter of complaint to 14 different city offices, demanding action. As reported in the Krakow Post in October, there has been a long-standing campaign by Old Town residents, including those living around Wielopole 15, to stop anti-social behaviour by clubbers.

Ms Sołtys said: “The walls and furniture in our flats shook every night for the unbearable and earthquake-like noise coming from the building. We are not against people having fun, but their legitimate freedom badly affected the life of our neighborhood.”

The official investigation into the causes of the accident continues.