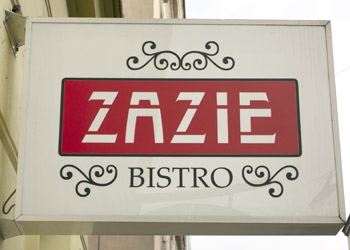 Zazie Bistro is named after the eponymous heroine of Raymond Queneau’s 1959 novel Zazie dans le Métro. Where the book is known for its highly idiosyncratic, non-standard use of the French language, the restaurant has a similarly informal attitude toward French food. If the resulting book is as good as the resulting dining experience, I must get around to reading it.

Husband and wife team Aleksandra and Tomasz Kaszuba, who opened Zazie a year ago, are not professional chefs. They don’t have gilt-edged certificates from French schools of cuisine and nor have they spent years slaving under barking chefs in the kitchens of a grand Parisian hotel. They do, however, have a huge passion for French cooking.

“We both love cooking, and we spent many months trying and perfecting dishes for the first Zazie menu,” said Aleksandra. The experimentation and practice didn’t end there. One year later the menu is in its fifth incarnation. It includes several classics, but this is no generic selection. Dishes are not chosen according to the expectations for a cookie-cutter, French-themed restaurant, but as Aleksandra and Tomasz discover and perfect new favourites. Bespoke menus of this kind are a sure sign that the diner can expect something special, and the expectation is not disappointed.

I started with an onion soup of such extraordinary depth of flavour and heartiness that it could have served more than satisfactorily as a main course. I am glad, however, that I didn’t know this before ordering, because it would have meant missing the excellent cassoulet that arrived next. My dining partner started with a superbly silky pâté (I almost got us thrown out for daring to ask if it was made on the premises) and followed with a Beef bourguignon that evoked significant cross-table envy.

I must not give the impression from these classics that Zazie Bistro is in any way stuffy or pretentious – it is the opposite. The decor is vanishingly ordinary and the furnishing and lighting have never been anywhere near the pages of a design magazine. None of this matters, because the place is buzzing with the far more satisfying aura of people enjoying themselves. The staff barely have time to stand still, but remain friendly and efficient, there are occasional clangs and curses from the kitchen, which is the only way proper cooking can be done, and the burbling chatter from customers is a manifestation of the relaxed tenor of the place. If you are planning to visit one evening, and you really should be, I strongly recommend booking first – at least a dozen disappointed diners had to be turned away in the two hours I was there.

It would also be wrong to imagine Zazie as a place strictly for a substantial evening meal. There is plenty on the menu that will satisfy as a lunch or snack with coffee – the sweet selection is as finely crafted and intriguing as any other area of the menu. I didn’t have the internal capacity to try any of the quiches, salads or toasted intricacies on offer, but I’m willing to bet they are superb.

This really is dining as it should be, and an incredibly rare example of it in Krakow. Good restaurants in this town tend to be overly formal, and informal eating places tend to serve blandness or junk. At Zazie you get the best of both worlds – the feeling that you are dropping in on a convivial community and food prepared by people who not only know what they are doing, but love it too.