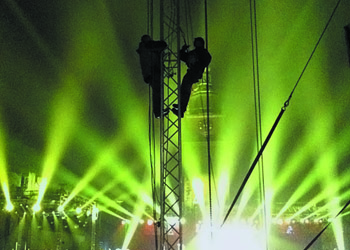 It’s the only star presence likely to be seen in Krakow’s market square this winter – as the city council has announced that spending cuts mean the traditional New Year’s Eve concert will go ahead, but with a massively reduced budget that will not include cash for live acts. Usually, the city spends almost 2 million złoty on the event; this year, only 150,000 zł is available.

Axing the Sylwester concert is just one of a raft of thrifty measures announced by city mayor Jacek Majchrowski, in the 2012 budget. He warned that the coming 12 months were likely to be financially lean, but said that a package including increased property taxes, costlier public transport tickets, and cuts to ‘non-essential’ work – including road repairs – could bring in an extra 38 million zł this year.

Prominent among the projects due to be shelved are work on a long-awaited access road in Czyżyny, and modernisation work at Wawel Hill. Street repairs are urgently needed in Krowodrza, and a new sports stadium in Podgórze – currently lacking a roof – is likely to remain unfinished. Spending on education and culture is also to be cut.

However, as an independent politician, Mr Majchrowski faces opposition from party-aligned councillors, who have warned that he is on ‘thin ice.’ They have warned that Krakow’s budget deficit next year could be as high as 142 million zł.

Councillors from Civic Platform (PO) have urged the mayor to consider their own suggestions, to help keep the city’s finances under control.

These include tax reforms, merging purchases made by city departments to take advantage of bulk deals, cutting the number of civil servants working for the council, and halting free travel for the families of public transport body MPK’s employees. PO believes its own suggested measures could bring in up to 300 million zł – but admitted that a 20 per cent margin of error must be built in to this figure.

Mr Majchrowski said that he had been instructed by councillors to follow the example of other cities in setting the budget. But, he added, other cities had bigger problems, and could not pay their bills. He is reported in Gazeta Wyborcza as saying: “Reforms are necessary, but plans must be based on accurate calculations.”

Overall Krakow’s budget for 2012 is just over 3.5 billion zł – the highest ever.