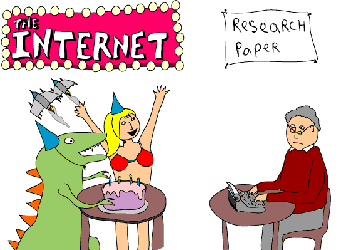 The marking is getting to me. This week I had a student who had written the letter ‘u’ rather than the second person singular pronoun. I resisted the urge to gouge the offending character out of the paper by breathing deeply and stepping away. Why do they do it? Maybe it’s laziness, but I blame the Internet.

Students see all sorts of mistakes online without recognising them for what they are. Nowadays, if it’s online it must be true. The Internet is a fantastic tool, but it’s only as good as the skill of the person using it. I can’t believe how we managed without it, but at least I know we did. If I want information, it’s not always second nature to reach for the mouse. Until recently, I would pick up a physical recipe book – although I’m now more willing to risk sugar granules in the keyboard when I’m trying out cake recipes. This is a harmless area of enquiry, but others are not.

For students today the Internet is regarded as the leading authority on every subject. I was startled to hear on BBC radio (which I can only listen to thanks to the Internet) that, according to a survey carried out in Britain by the think-tank Demos, most teenagers are more inclined to believe YouTube than anything in a newspaper, on television or from the government.

I’m all for healthy scepticism, but it seems that many don’t extend their scepticism to anything found through a Google search. Consequently, all sorts of untruths spread more quickly than cold viruses and infect group consciousness more rapidly than has ever previously been possible.

“Osama Bin Laden isn’t dead.” “The Holocaust never happened.” The ability to differentiate opinion from fact, and to verify information, isn’t just desirable, it’s essential. It isn’t all down to teachers – everyone needs to have conversations with young people about where their beliefs come from. We need to equip ourselves with the critical skills that will enable us to investigate the sources of our information without dismissing or believing until we have established the reliability of those sources. In Hamlet’s words: “There’s nothing good or evil but thinking makes it so.” He’d have loved the Internet.

A thousand years ago, most people believed the world was flat. It took new technology, in the shape of a telescope, in the hands of person with an enquiring mind to drag human beings to a clearer view of the way the world is. Our latest tools can do the same, if we all have curiosity and a desire to get an accurate view of the world. It would be a pity if, in another thousand years, the Internet was thought of as a device that obscured our world with rumours and inaccuracies. Or worse still, if it was taken for granted and no one thought of its value.