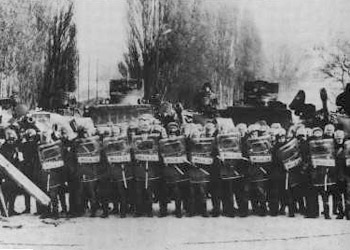 Also like last year I was amazed by how popular the show is. It’s perfectly possible to look at all the photos in the competition online, for free, and from the comfort of you favourite tea-sipping chair. So what’s the draw of paying for the privilege of looking at the same photos with a lot of other people annoyingly standing in front of them? There’s something queasy about being in a room full of privileged Europeans, who look like they have every intention of popping in somewhere for a latte a bit later on, milling around beautifully shot images of Third-World citizens at or beyond the point of total degradation. I had a mental image of surreal role reversal in which Somali refugees somewhere strolled around two-by-three metre blowups of freckle-faced Danes struggling to come to terms with changes to Facebook.

The point, of course, is that Poland has made the transition from being a place where harrowing news images are shot to being a place where they are coolly appraised while fiddling with an iPhone. Look back at pre-1990 World Press photos and you’ll find not a few images of grim-faced Polish strikers, and militiamen coshing students. This is what is really meant by ‘developing world’ and ‘developed world’ – in the former you anticipate violence and official callousness and in the latter you never think about it. Poland has migrated from one to the other in the space of a generation.

The events of November 11 have rendered my optimism regarding the absence of future World Press Photo winners originating in Poland questionable. Let’s hope it’s a temporary blip.

2 thoughts on “Perspectives on Poland: Right Side of the Lens”