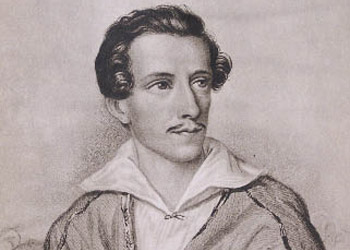 A lost manuscript by Polish literary giant Juliusz Słowacki has been found in the Russian State Library by a Krakow historian. Experts are describing the finding as ‘epoch-making.’

“During my research I often encounter interesting items in the inventories, though not necessarily related to my area of expertise. Such was the case with the Słowacki manuscript,” said Henryk Głębocki, who has been foraging in Russian archives for almost 20 years.

Mr Głębocki encountered the notebook for the second time in 2010, and only then decided to consult experts to establish its authenticity. Research proved that it was one of two notebooks used by Słowacki during his journey to the Middle East and Africa in the 1830s. A fair copy including poems and water colours was returned to Wrocław after the turmoil of World War II and is now deposited at the Ossolineum National Library in the city.

The draft, which has now been rediscovered, was leased from Warsaw by the town of Kamieniec, Słowacki’s birthplace (now in Ukraine), for the 130th anniversary of the poet’s birth in 1939. “It must have been seized by the Red Army entering eastern Poland in 1939, though everybody thought it had burned along with all the other books in the Krasiński Library during the Warsaw Uprising in 1944. Paradoxically, this theft is what saved it,” said Mr Głębocki, adding that he had felt deeply moved touching the long lost manuscript for the first time.

Juliusz Słowacki, one of the greatest Romantic poets of the 19th century, took his notes during a grand tour of through Greece to Egypt’s border with Sudan and then back through the Holy Land to Italy in 1836 and 1837.

The 74-page draft notebook includes the only known full version of Słowacki’s poem ‘The Trip from Naples to the Holy Land’ written in the poet’s own hand, as well as various personal notes, sketches and early fragments of other works.

For Słowacki scholars the find is a real treat, and it is hoped it will help to solve academic controversies over the poem, as well as providing an insight into the poet’s creative process.

According to Prof. Andrzej Waśko of the Jagiellonian University, an expert in Romantic literature, the notebook is a genuine treasure of Polish culture. The newly found version of ‘The Trip from Naples to the Holy Land’ has already been analyzed by an expert in Romantic literature, Prof. Maria Kalinowska from the Nicolaus Copernicus University in Toruń, and her monograph is to be published this year.

The Russian State Library archive number on the Słowacki manuscript bears the date 2001, which means it was probably entered into the open record after spending many years in secret archives, where many ‘liberated’ treasures were held by Communist authorities.

During Boris Yeltsin’s presidency some materials were returned to Poland, including documents from the Auschwitz concentration camp and some of the writings of Józef Piłsudski, because Yeltsin issued a decree that special collections were to be liquidated and their contents put into official circulation. But Russian libraries and state archives are thought to still hold documents from hundreds of Polish institutions that existed before World War II.

The finding has provoked arguments about the effectiveness of the procedures for reclaiming art works from Russia, especially as it has emerged that the Ministry of Foreign Affairs (MSZ) only learned about the finding from the press a few months after a scientific paper was published in Arcana magazine.

The MSZ website includes a list of 20 items reclaimed over the last two years, but the last one to come home from beyond the eastern border was Pompeo Batoni’s ‘Apollo and two Muses,’ returned in 1997.

“Currently a procedure is in operation to reclaim ten pictures belonging to various Polish collections from the Pushkin Museum in Moscow,” said the MSZ’s press office, and the process of gathering all the documents required to launch a similar claim for the Słowacki manuscript is now underway. It is, however, not know how long this procedure might take, and the MSZ is talking cautiously in terms of years.

“I’d wager Russian archives still conceal many valuable Polish works but, unfortunately, there is no official exchange program that would allow for a proper search,” said Mr Głębocki.